Olympic Disciplines - Sailing is one of New Zealand's most successful Olympic sports and has produced some of our most well-known sporting personalities, with the likes of Barbara Kendall and Russell Coutts. 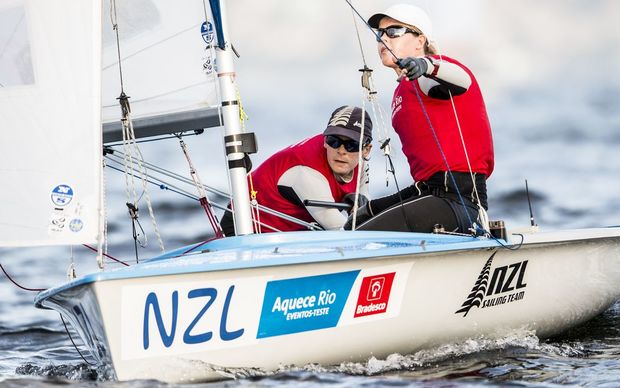 While sailboats come in a multitude of different shapes and sizes, there are essentially five main classes used in the Olympics with only one or two sailors per vessel.

The boats race around a set course marked by buoys, and in most cases 11 races are used to determine the medallists.

New Zealand crews qualified for the 2016 Rio Olympics regatta in all 10 events, one of just three nations to qualify a full quota of boats for Rio - Great Britain and France were the others.

The Olympic sailing regatta will take place from Monday 8 August 2016 to Wednesday 17 August 2016 at the Marina da Glória in Copacabana.

The Nacra 17 is a multi-hull (catamaran) vessel, RS:X is a sailboard (windsurfer) and the other classes are single-hull dinghies.

Races are scored using a low point scoring system in which the boat with the lowest tally at the end of the competition wins gold.

The first-placed boat in each race gets one point; the second two points and so on.

Sailors may exclude their worst score in those first 10 (12) races.

The 10 boats with the lowest scores progress to the medal race where points are worth double.

The Stars of Sailing

Burling and Tuke are naturally chasing 49er gold in Rio's Marina da Glória and have posted a long unbeaten streak after the London Olympics, having won four consecutive World Championship crowns in 2013, 2014, 2015 and 2016.

Their main challengers in 2016 may be friends and training partners, Nathan Outteridge and Iain Jensen, who won gold in the event for Australia in 2012.

Alexandra (Alex) Maloney and Molly Meech will represent New Zealand in the women's skiff event (49erFX) which makes its Olympic debut in 2016.

Both are first time Olympians, but have proven they're among the best in the world after winning the 2013 49erFX World Championships and the 2016 Sailing World Cup Miami Regatta in January.

The main threat to Maloney and Meech's chances of claiming the first ever 49erFX Olympic gold medal could be Brazilian World Champions, Kahena Kunze and Martine Grael.

Paul Snow-Hansen and Daniel Willcox have been named in the Men's 470 class.

This will be Snow-Hansen's second Olympic Games having sailed at the London 2012 Olympic Games in the same discipline, with Jason Saunders as crew, finishing 5th overall.

Snow-Hansen and Willcox achieved a career best performance at the 2016 Men's 470 World Championships held in Argentina in February with a silver medal.

Gemma Jones and Jason Saunders will represent New Zealand in the second event to be included in the Olympic sailing regatta for the first time - the mixed gender multihull contested in the Nacra 17.

Danish sailor, Jonas Høgh-Christensen, has unfinished business after the great Ben Ainslie edged the Dane to the gold medal in the Finn class in 2012.

Rio will be Høgh-Christensen's fourth and final Olympics, but he now faces Giles Scott who has emerged from Ainslie's shadow to earn a World Championship title for Great Britain in 2014.

The most successful Olympic sailor of all time is Denmark's Paul Elvstrom. He won the first of his four gold medals at consecutive Games in 1948, and was still competing in 1988 at the age of 60.

New Zealand's most successful Olympic sailor to date is windsurfer Barbara Kendall who has three Olympic medals to her name - gold in Barcelona 1992, silver in Atlanta 1996 and bronze in Sydney 2000.

After the 1996 games in Atlanta, the sport of yachting was to be known as 'sailing' to coincide with the Federation name change from `International Yacht Racing Union (IYRU)' to `International Sailing Federation (ISAF)', and then 'World Sailing' in 2016.

The Los Angeles Olympics ushered in a period of sustained success for New Zealand, with medals at every Olympics except Athens 2004.