Neil Wagner took career-best test figures of six for 41 as the Black Caps took complete control of the opening day of the first test against Zimbabwe. 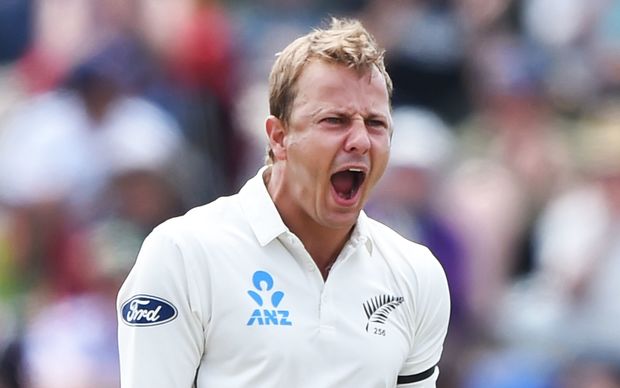 The tourists bowled their hosts out for 164 on the first day in Bulawayo, with more than half the runs coming in an 85-run ninth wicket stand, before closing the day on 32 without loss.

Openers Martin Guptill (14 not out) and Tom Latham (16 not out) will resume in the morning with New Zealand just 132 behind, but day one belonged to quick bowler Wagner, who produced fiery spells of fast bowling that targeted the bodies of the timid home batsmen.

Zimbabwe, playing their first test in almost two years, had elected to bat on what looked like a flat wicket, but after losing Brian Chari (four) to the second ball of the innings off the bowling of Tim Southee, found themselves 72 for eight soon after lunch.

South African-born Wagner did the damage, taking three wickets in an over as the Zimbabwe middle order struggled to answer his lively bowling.

"It was a tough wicket [to bowl on] and we had to fight really hard to create some opportunities," Wagner said.

"The ball got a little soft and it was easier to bat then. It was hard graft for us."

Sean Williams (one) lobbed a catch to the same area, though he was convinced the ball had come off his helmet.

With no review system for this series he had to accept the decision of Australian umpire Paul Reiffel.

Then came that explosive 33rd over as Wagner struck three times in five balls.

Sikandar Raza (22) was another victim at mid-wicket and Regis Chakabva (0) nicked behind before home captain Graeme Cremer edged a rising delivery to short leg for a first-ball duck.

There was some belated resistance from Zimbabwe as debutant Prince Masvaure (42) and Donald Tiripano (49 not out) put on a patient 85 for the ninth wicket before the former was unlucky to be given out lbw to Southee.

Wagner ended the innings when he bowled Michael Chinouya for one to take his sixth wicket and earn test-best figures.

Look back over the match here: