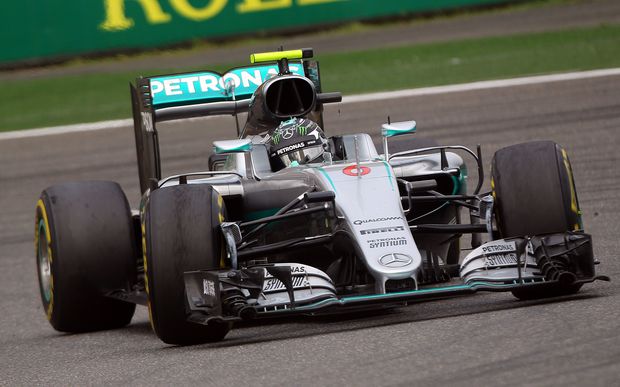 The world championship leader, fresh from signing a two-year contract extension keeping him at Mercedes until the end of 2018, lapped the 4.3km Hungaroring in 1min 20.435sec in the afternoon, after having gone second quickest in the morning.

Hamilton, bidding to seize the championship lead for the first time this season with an unprecedented fifth win in Hungary, was fifth after crashing out with four laps on the board.

The Briton, who went into the weekend at one of his most rewarding circuits as the man to beat, was fastest in the morning.

But he lost control of his Mercedes 15 minutes into the second post-lunch session, skating across the run-off and clouting the barriers side-on.

He underwent a precautionary check at the medical centre and appeared to be fine, but his car had to be fully stripped and checked, ruling him out of the rest of the session.

Hamilton has won four of the last five races and trails Rosberg by one point heading into the race, down from the 43-point deficit between the pair after May's Spanish Grand Prix.

He jointly holds the record for most wins at the track with Michael Schumacher.

His Red Bull team, the only ones to beat Mercedes this year with Max Verstappen's win in Spain, are hoping to pose a genuine threat to their German rivals at a circuit that should suit their car.

Sebastian Vettel, who won the race last year, was third in his Ferrari ahead of Verstappen. His team mate Kimi Raikkonen was sixth.

McLaren, who are also expecting an improvement in form, ended both sessions seventh and eighth with Fernando Alonso ahead of Jenson Button, on a track where both claimed their maiden Formula One wins.

The Force India cars of Nico Hulkenberg and Sergio Perez rounded out the top 10.

Hamilton's accident was the only high-profile incident of the session, run in hot conditions with track temperatures in the forties.

The crash prompted a brief red-flag stoppage as track marshals worked to the repair damage to the barrier.