Almost two years to the day since Brisbane sacked him, Anthony Griffin enjoyed a triumphant Suncorp Stadium return as Penrith jumped into the NRL top eight with an upset 31-12 win over the Broncos. 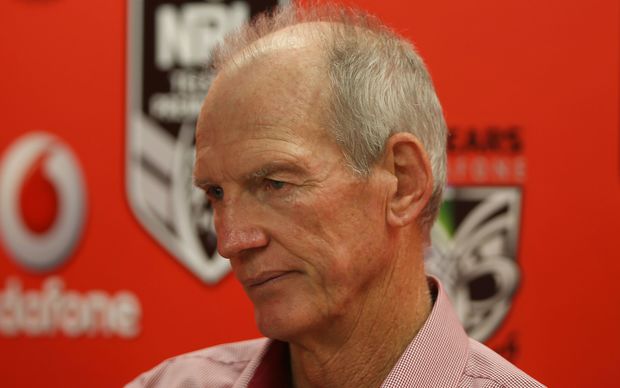 With a shock victory in front of 30,878 fans, Griffin celebrated his first game with the Penrith reins in Brisbane since being told by the Broncos in July 2014 that he would be replaced by Wayne Bennett

Penrith (9-9 record) overwhelmed a flat Brisbane by five tries to two to move to seventh on the ladder.

Griffin extends his remarkable run against Bennett, enjoying eight wins in 10 games against sides coached by the master mentor.

That includes their round-three 23-22 upset at Penrith.

The sixth-placed Broncos (10-8) have slumped to their sixth loss in eight games and are in danger of stumbling in the finals race.

It was only Brisbane's second loss in seven games against Penrith at Suncorp Stadium.

It also marked back-to-back home defeats for the Broncos.

Penrith led 18-0 at the main break before piling on another two second-half tries including a 79th-minute effort by lock Trent Merrin.

Griffin insisted he did not get any personal satisfaction in getting another win over Bennett.

"It gives me more satisfaction how our side is gelling together, just watching them go set for set against a quality side like that for 80 minutes," he said.

And he didn't want to make any bold calls about Penrith's finals chances.

"I am not sure what is going to happen in the next six weeks," he said.

Bennett wasn't reaching for the panic button despite their worrying display.

"We couldn't build any pressure, simple as that," he said.

Asked if he was concerned about missing the NRL finals, Brisbane captain Corey Parker said: "That is not even on my radar - that's seven weeks away."