The five times major winner Phil Mickelson has shrugged off the worst weather of the week to maintain his lead at the British Open.

The 46-year-old American, bidding to become the oldest winner of the championship in the modern era, compiled a two-under-par 69 in the second round to finish with an overall 10-under tally - one shot ahead of Swede Henrik Stenson.

Conditions were perfectly acceptable on the front nine and Mickelson took advantage with early birdies at the fourth and seventh.

The veteran left-hander then delivered a pinpoint tee shot at Royal Troon's signature eighth hole, the par-three Postage Stamp, that landed several feet beyond the flag before spinning back to stop within inches of the cup.

As driving rain began to fall on the inward half and winds started to gust, Mickelson mixed two bogeys with a solitary birdie to make sure he claimed the clubhouse lead.

"I really enjoy the challenge this weather and these elements provide," the 2013 British Open winner told reporters. I thought it was a good round to back up the low round yesterday.

"I made one or two bad swings that led to bogeys but for the most part kept the ball in play and played kind of stress-free golf.

"One of the things I've really worked on over the years is getting a ball on to the ground off the tee quickly so the ground is affecting it more so than the air," added Mickelson.

There was a sombre mood at the start of the day with the French tricolour flying at half-mast by the 18th green as the Open paid tribute to the victims of the Bastille Day attack in Nice.

French golfer Clement Sordet, had the words 'pray for Nice' emblazoned on his cap which also carried a black ribbon.

"I tried not to think about it but that's why I had this on my hat," Sordet told reporters after carding a 75 for an eight-over-par tally of 150 that is highly unlikely to make the cut.

"I live in Nice. It happened maybe 500 metres from where I live.

"I'm really proud to be French and I think we all need to support each other. I just say my prayers," added Sordet. 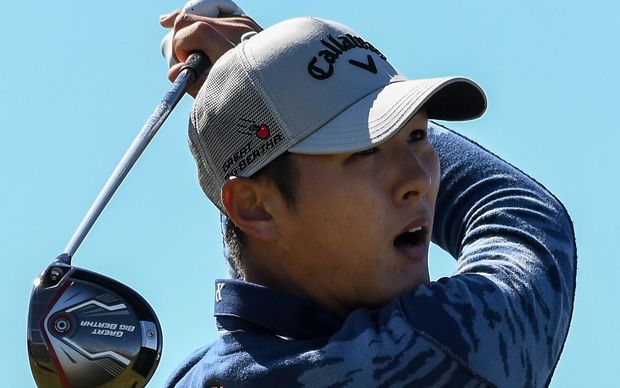 New Zealanders Danny Lee and Steven Alker are set to miss the cut.

Lee carded a six-over 77 to follow his seven-over 78 in the first round to finish at 13-over for the tournament, while Alker followed his two-over first round with a four-over 75 to sit at six-over.