Novak Djokovic made tennis history at Wimbledon today when he notched up the most consecutive grand slam match victories in the Open Era, and said he aimed to continue his assault on the record books. 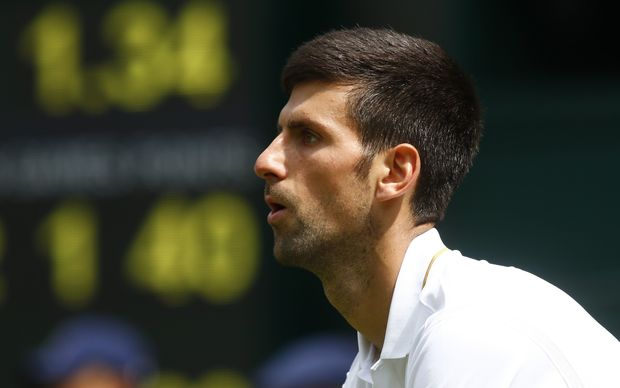 The defending champion brushed past France's Adrian Mannarino 6-4 6-3 7-6(5) to book his place in the third round.

"I have to be very grateful to have the opportunity to make the history of the sport," the world number one told reporters. "Knowing that I won 30 in a row, it's very pleasing. I want to keep on going. Let's see where it takes me.

"Every single record that I managed to achieve in the last couple of years is important," he added. "Every next one that I have a possibility to achieve is more motivation."

Djokovic last lost a slam match when he was defeated by Stan Wawrinka in the 2015 French Open final. He now holds all four major titles, and has another historic mark in his sights.

The 29-year-old Serb is aiming to become the first man since Laver in 1969 to achieve the calendar Grand Slam - winning the four major titles in a single season.

Djokovic, seeking his third consecutive Wimbledon crown, played well within himself during the second-round match against Mannarino and was rarely troubled.

For once though, the storyline belonged to his opponent as the 772nd-ranked underdog Willis, the talk of the tournament so far, basked in the limelight on a day he will never forget.

Federer played the role of pantomime villain in a 25-minute first set as he denied Willis a game.

But thereafter the 25-year-old Briton, cheered on by his friends at courtside, played a full part in some entertaining action under the showcourt's closed roof.

When Willis, who got through six qualifying rounds and then beat Ricardas Berankis in round one, finally got on the scoreboard in the second game of the second set the roar could be heard all over the grounds.

He kept Federer on his toes with some audacious drop shots and slices and fought right to the end.

Federer looked a little relieved when he broke for a 5-4 lead in the third set and congratulated Willis warmly after his opponent sliced a final backhand long in the following game.

The Czech 10th seed hopes to recapture the triumphs of 2011 and 2014 after losing in the third round last year and with the start of her 2016 season blighted by gastrointestinal illness.

She put up a commanding display, only losing three points behind her first serve and shooting seven aces against Cirstea, ranked 85th in the world.

Only a limited number of matches were played today because of rain.... one of those postponed was New Zealander Marina Erakovic's second round match against Jelena Jankovic.