Robbie Brady scored a late winner for Ireland to put them through to the knockout stages of the European Championship for the first time thanks to a 1-0 win over Group E winners Italy in Lille. 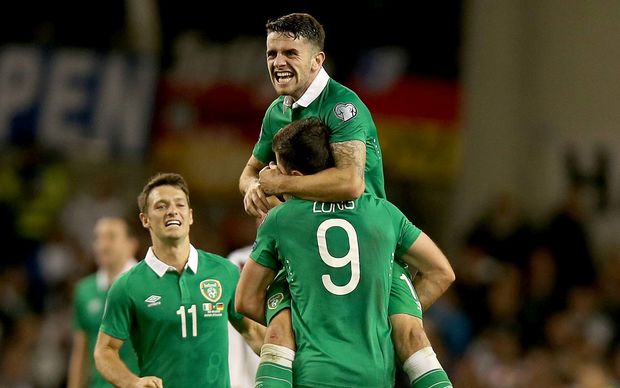 Brady scored his 85th minute headed goal from a pinpoint cross by his Norwich City clubmate Wes Hoolahan, who had just spurned a golden opportunity to seal the well-deserved victory himself.

It earned the Irish a famous victory against a second-string Italy side, with the three points securing third place in the group and setting up a last-16 tie against hosts France in Lyon.

With his team already guaranteed to top the group, Antonio Conte made eight changes, with only Leonardo Bonucci, Andrea Barzagli and Alessandro Florenzi surviving fron the side that started against Sweden.

Meanwhile Zlatan Ibrahimovic's international career ended in a damp squib when Sweden lost 1-0 to Belgium in their final match on Wednesday and failed to reach the last 16.

Radja Nainggolan's fine shot after 84 minutes sent Belgium into the knockout stages and a game against Hungary as they finished second in the standings, level on six points with group winners Italy.

The Swedes ended bottom on one point and Ibrahimovic's bold promise that he would never finish with a disappointment proved to be mistaken.