New Zealand's Shane van Gisbergen avoided chaos and carnage in the weekend's final race in Darwin to score his second win of the V8 Supercars season, as Holden again took charge of the championship. 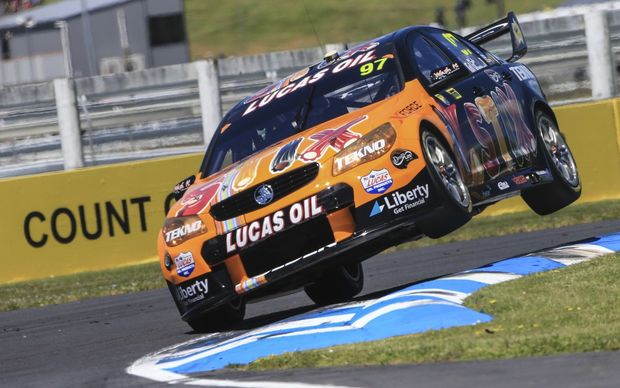 Last night's 70-lap sprint started and ended in madness, with five cars forced to retire and one driver hospitalised.

Van Gisbergen started from pole position but lost the lead before he even got to the first turn of a dramatic opening lap at Hidden Valley Raceway.

The Fords of Chaz Mostert and Fabian Coulthard were ripped apart following a three-way tussle with Volvo's James Moffat, bringing an early end to their afternoon.

Moments later, Lee Holdsworth's Holden was bumped off track at high speed and smashed sideways into a concrete barrier.

He suffered a fractured pelvis and remains in Royal Darwin Hospital. He will not race in Townsville next month.

The incidents sparked the first of three safety car periods - a record at the circuit.

He becomes just the third driver this season to win more than once, following his triumph in Tasmania in April.

"Amazing day," said the New Zealander, relieved after a mistake cost him victory from pole on Saturday.

"We have a really fast car and now it's comfortable.

"I really struggled with that the last few rounds but now it's nice to drive and fast."

His Red Bull Racing teammate Jamie Whincup cemented his lead on top of the championship standings with an eighth-place.

It was a disastrous afternoon for reigning champion Mark Winterbottom, who damaged his car after running into the back of Todd Kelly's Nissan and then copped a drive-through penalty for the incident.

He was later involved in another crash with Aaren Russell.

He finished 20th and slips back to fourth in the drivers' standings, 63 points in arrears. He led the series before this round.

The championship heads to Townsville next month.