Ireland produced a historic first-ever win in South Africa when they beat the Springboks 26-20 at Newlands despite playing an hour of the game down to 14 men. 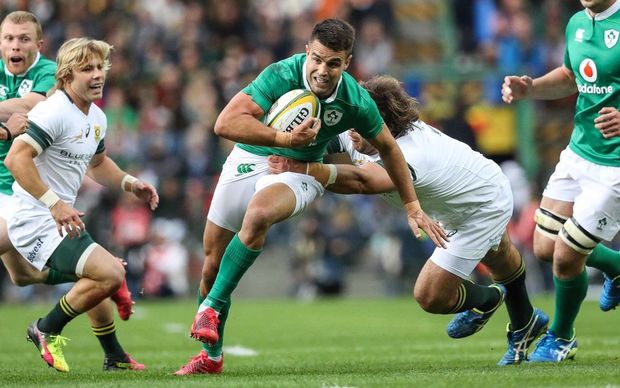 Ireland had their flanker CJ Stander sent off after 20 minutes for a bad challenge that left Springbok fly half Pat Lambie spread-eagled on the field.

Despite the disadvantage, the tourists won the first of the three-test series with a gutsy showing.

They were assisted by an error-ridden performance from the home side, playing their first game under new coach Allister Coetzee and their first since third place last October at the Rugby World Cup in England.

Ireland scored tries through Jared Payne and Conor Murray while Lwazi Mvovo and Pieter-Steph du Toit went over for the Boks in front of 42,620 fans at the Cape Town venue.

South Africa looked like almost snatching victory after the final hooter but the Irish defence held firm to keep JP Pietersen from scoring in the corner.

It was what Ireland deserved after starting as underdogs but more than matching their hosts in all departments.

An early rolling maul from Ireland provided the first try after 10 minutes as pressure on the hosts produced a punt behind the home defence that Payne was quickest to dot down. Lock Lood de Jager was yellow carded for an off-the-ball tackle in the process.

The advantage it provided Ireland was nullified when Stander's knee caught Lambie flush on the chin in a horrific late tackle that led to the Springbok pivot being carried off on a stretcher and South African-born Stander being red-carded. Lambie was taken for medical checks but pronounced fine.

South Africa went ahead for the first time in the 31st minute when Mvovo cut through the middle after a pop pass from Lambie's replacement Elton Jantjies.

Robbie Henshaw earned a yellow card in the process after catching Jantjies late with his tackle, leaving Ireland to see out the first half with 13 men.

Paddy Jackson's drop goal in the 37th minute allowed Ireland to go into the break level at 13-13.

The tourists started sharper when play resumed and the individual skills of scrum half Murray quickly produced a second try for Ireland, which put them 20-13 ahead.

Repeated handling errors cost the Boks as they attempted to get back into the game while Ireland stretched their lead to 23-13 with a successful long-range penalty from Jackson.

South Africa were back within three-point range when replacement lock Du Toit intercepted a shallow pass inside the Irish 25 and stormed over to turn the momentum.

However, more mistakes allowed Jackson to kick over another penalty and Ireland held out for victory.

The second test is in Johannesburg next Saturday and the last match is in Port Elizabeth on June 25.