Gordie Howe, known as "Mr. Hockey" for a tough but skillful playing style that shattered records over a career spanning five decades, has died at the age of 88. 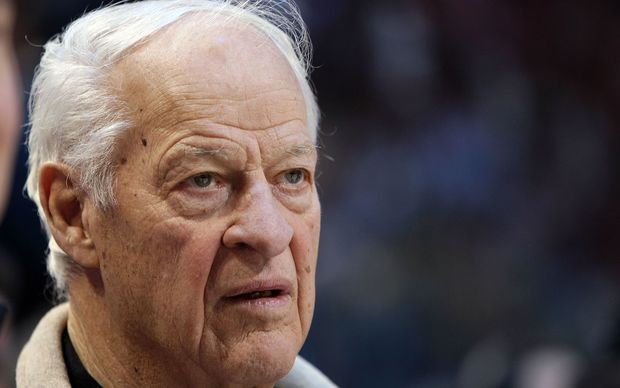 The cause of death was not disclosed. Howe suffered two strokes in October 2014 and from advanced dementia in recent years.

Howe, a Canadian who spent his prime playing for the Detroit Red Wings of the National Hockey League (NHL), was considered one of the greatest hockey players of all time. He may have been eclipsed only by fellow countryman Wayne Gretzky in terms of goals and points, but not in grit and longevity.

Howe attributed his long career, 33 seasons, in such a rough sport to passion.

"You've got to love what you're doing," he once said. "If you love it, you can overcome any handicap or the soreness or all the aches and pains and continue to play for a long, long time."

Howe joined the National Hockey League's Red Wings in 1946 and led them to four Stanley Cup championships before retiring in 1971 after 25 seasons with the team.

He was inducted into the Hockey Hall of Fame in 1972 but by the next year he was on the ice again.

He joined the Houston Aeros of the upstart World Hockey Association (WHA), alongside sons Mark and Marty, and taking the team to two consecutive championships. He would say that playing with his sons was the highlight of his career.

All three Howes joined the WHA's New England Whalers in 1977 and when the league folded two years later, the Whalers joined the NHL, giving Howe one more season in hockey's top league.

When he retired for a second time in 1980, Howe was the NHL's regular season leader in career goals and points, both records later broken by Gretzky.

Howe, the only player to play in the NHL after turning 50, would play all 80 games in his final season as well as a handful of games after turning 52.

Gordon Howe was born in the small farming town of Floral, Saskatchewan, and put on a pair of ice skates when he was 4 years old. He played in an organized league before he was 10 and had a tryout with the NHL's New York Rangers at 15 but failed to impress.

A year later, a Red Wings scout discovered Howe and two years after that, in October 1946, he scored a goal in his NHL debut in what proved to be the start of one of the game's most prolific careers.

Howe went on to become a 23-time All-Star, won the Hart Memorial Trophy as the NHL's Most Valuable Player six times and led the league in scoring six times.

He was part of hockey's most fabled scoring units, the so-called "Production Line" in reference to Detroit's auto industry, alongside Sid Abel and Ted Lindsay.

Howe finished in the top five in NHL scoring for 20 consecutive seasons and still holds the record for most consecutive 20-goal seasons at 22.

The term "Gordie Howe hat trick," consisting of a goal, an assist and a fight in the same game, was coined in reference to the powerful right wing's reputation for never backing away from a scuffle.

Howe played a remarkable 2,421 games, including playoffs, over his professional career. He is second on the NHL's all-time goals list with 801, behind Gretzky with 894, and fourth on the points list with 1,850.

At the age of 69, Howe returned to the game in 1997 with the International Hockey League's Detroit Vipers, playing just one shift for less than a minute.

Howe was married to Colleen Joffa Howe for 55 years until her death in 2009. She managed the business affairs of Howe and their sons Mark and Marty. The Howes also had a son Murray and daughter Cathy.