Thousands have attended a farewell procession for boxing legend Muhammad Ali in his home city of Louisville, in the US state of Kentucky. 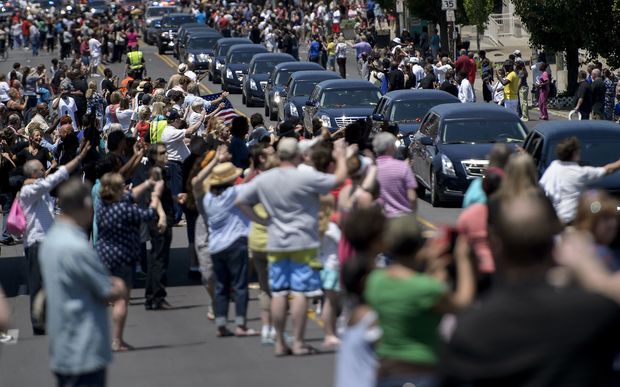 People watch the burial procession with the remains of boxing legend Muhammad Ali as it travels to Cave Hill Cemetery in Louisville, Kentucky. Photo: AFP

Onlookers cheered his cortege as it passed by on its way to a city cemetery where he was then buried in a private service for family and friends.

An interfaith memorial service for the boxer is to be held shortly at a major sports centre.

Actor Will Smith and ex-boxer Lennox Lewis are among the pallbearers, while former President Bill Clinton is to deliver one of the eulogies

Thousands of free tickets for the memorial service were snapped up within half an hour. 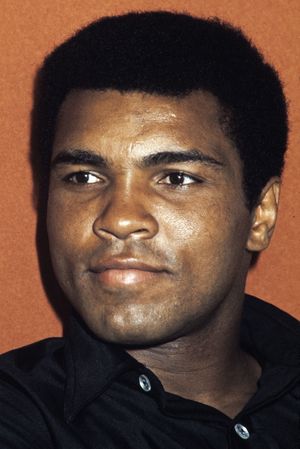 The motorcade procession began at about 10:35 local time, more than an hour behind schedule, and took the coffin past his childhood home, the Ali Center, the Center for African American Heritage and then down Muhammad Ali Boulevard.

Onlookers lining the roadside waved, took photos and chanted "Ali, Ali" as a cortege led by the hearse carrying his coffin drove through the downtown area.

Fans threw flowers at the hearse and rose petals were scattered along the route.

In one neighbourhood, several young men ran alongside the vehicle carrying a placard which read: "Ali is the greatest, thanks 4 all the memories."

A memorial service at the KFC Yum! Centre following the burial is due to begin at 14:00 local time.

Among those expected to attend the service is King Abdullah of Jordan.

Turkish President Recep Tayyip Erdogan attended Thursday's prayer ceremony and had been due at the service, but reports say he has cut short his visit to the US.

The reasons for his departure are not clear, though there are reports of differences with the funeral's organisers.

President Barack Obama will not be there, as he is to attend his eldest daughter Malia's graduation.

But in a video message, he said: "This week we lost an icon. A person who for African Americans, I think, liberated their minds in recognising that they could be proud of who they were."

Lennox Lewis, a former world heavyweight boxing champion himself, said it was an honour to be a pallbearer and that Ali's memory would never fade.

"The term 'float like a butterfly, sting like a bee' will always be remembered. He is an icon and a legend of boxing," he said.

The other pallbearers are family and friends, along with Will Smith, who portrayed Ali in the 2001 film about the boxer's life.

Abi Ajram, 48, who has made a 4,000-mile trip from London to pay his respects, told PA: "I feel Muhammad Ali deserved the world turning up for him. He was the number one."

The funeral service will be streamed live online.

One sour note was the report that some people were trying to sell the free tickets to the service on the internet.

Ali family spokesman Bob Gunnell said he was "personally disgusted" at attempts to profit from the event.

The funeral events began on Thursday with a Muslim prayer service attended by 14,000 people.

Ali wanted the service, known as a Jenazah, to be "a teaching moment", according to Imam Zaid Shakir, who led it.

American Muslims attending the service and watching on TV said they hoped that the public prayers would help Americans to become more familiar with Islam and its practices. 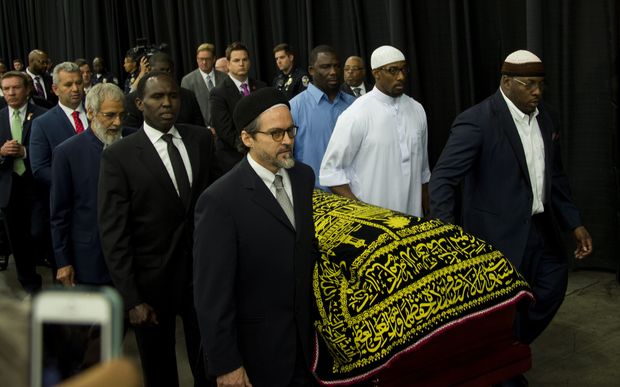 In 1964, Ali famously converted to Islam, changing his name from Cassius Clay, which he called his "slave name".

He first joined the Nation of Islam, a controversial black separatist movement, before later converting to mainstream Islam.

In his boxing career, he fought a total of 61 times as a professional, losing five times and winning 37 bouts by knockout.

Soon after retiring, rumours began to circulate about the state of his health.

He lit the Olympic cauldron at the 1996 Games in Atlanta and carried the Olympic flag at the opening ceremony for the 2012 Games in London.