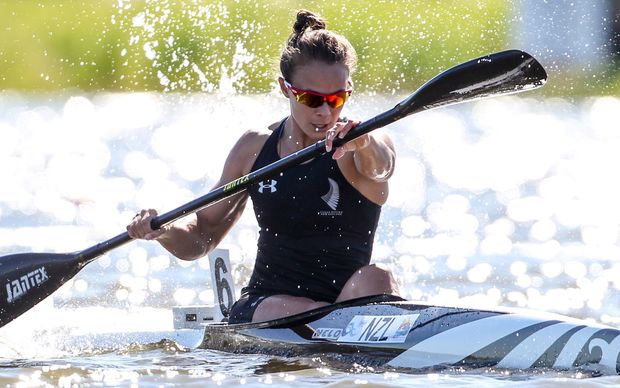 Carrington, the reigning world and Olympic champion, won the event in a time of 40.5 seconds.

It was another dominant display in the 200, her 13th consecutive major title over the distance coming with a winning margin of 0.664 seconds.

Despite a fast start from Poland's Marta Walczykiewicz and tricky conditions on the Montemor-o-Velho course, Carrington powered home to win in

"Looking forward, we will do some analysis and see where I can improve but this was another step to Rio and a chance to practise what we will do in Rio," Carrington, who has not lost a K1 200m final since 2011, said. "It was a really good race - racing Marta is awesome and she is incredible competitor and a great athlete."

Although her time wasn't especially quick, that was more a reflection of the light headwind rather than her form.

"These races are the best kind of training for Rio and wind conditions in Rio and Montemor are potentially similar," she explained. "In Rio it is a side wind from the left and here it is coming from the right. But it is good practice having a side wind and there is a bit of variability across the line."

Earlier, New Zealand's Marty McDowell finished last in the final of the men's K1 1000 metres, 12 seconds behind the winner from the Czech Republic, Josef Dostal.

Ninth place ended the Wellington paddler's World Cup campaign in a victory of sorts in just making the final - McDowell has been battling a virus for much of the last month.

He had a 3:44.004 time behind Dostal, who beat his team-mate Jakub Špicar into second.

McDowell said he took lessons from the event.

"I've definitely learned a lot over the two World Cups and during training, being a little bit down on energy, on how to race better and not attacking it so hard."

"I raced as good as I was going to today and I put into practice what I've learned - I didn't try and win the first 250 and just tried to conserve a little bit for later in the race."

Carrington capped another successful World Cup outing by proceeding directly to the K1 500m final too.

The 26-year-old was able to back up later in her K1 500m heat, beating Austria's Ana Lehaci and Ireland's Jennifer Egan to qualify directly for Sunday night's final.

Her time of two minutes 00.348 seconds was the fastest of the heats, with Polish pair Anna Pulawska and Ewelina Wojnarowska clocking 2:04.728 and 2:05.092 to win their respective heats.