Doubles veterans Leander Paes and Martina Hingis completed a full set of grand slam doubles titles, adding the missing piece to their collections in an emotional mixed final at the French Open. 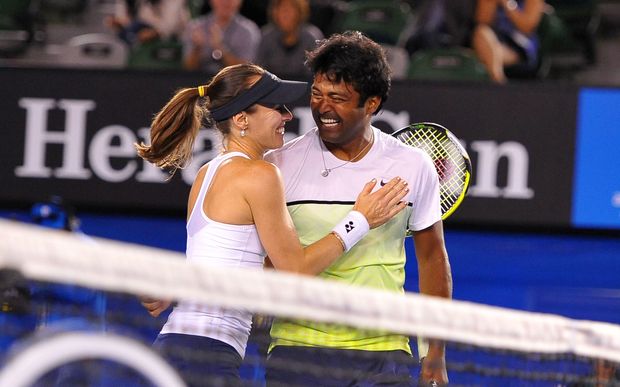 Paes captured the first of his 18 grand slam titles on Court Philippe Chatrier in 1999 when he teamed up with fellow Indian Mahesh Bhupathi to win the men's doubles title.

Over the course of the next 17 years, Paes criss-crossed the world several times over as he won men's doubles titles at all four majors and the mixed at the Australian and U.S. Opens and Wimbledon.

The missing link was at Roland Garros and today, Paes finally made sure his doubles CV was complete.

Spurred on during the closing rallies by a shout of "come on, old man" from the stands, Paes made the telling intervention on the final point, stretching far to his right to scoop up a Dodig groundstroke with a volley that the Croat drove into the net.

"Today I complete the grand slam with Martina, a player who inspires me," Paes said courtside after the pair added the Roland Garros crown to the Wimbledon and U.S. Open trophies they already hold.

Hingis began her march towards her own set of eight as far back as 1996 when, as a 15-year-old, she won Wimbledon with Czech Helena Sukova.

"I am glad you were able to complete the (career) grand slam, the one that was missing from your collection with me today," she told the Indian.