LeBron James had 23 points, eight assists and six rebounds, and Kevin Love returned to form with 25 points as the Cavaliers dismantled the Toronto Raptors in a 116-78 win that gives Cleveland a 3-2 series lead in the NBA Eastern Conference finals. 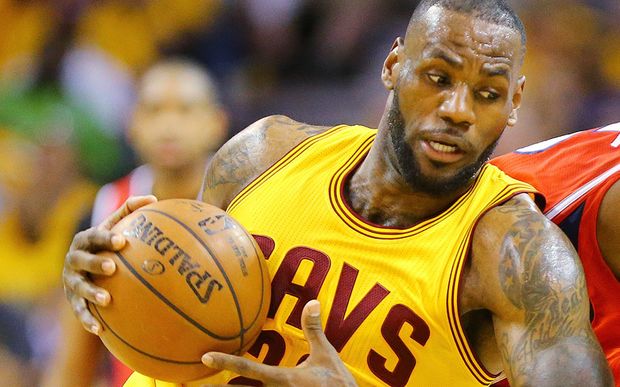 Kyrie Irving added 23 points in the Cavaliers' most lopsided playoff win in franchise history -- surpassing their 31-point victory at home in Game One of this series.

The Cavs have outscored the Raptors by 88 points in their three home games. Cleveland can close out Toronto and return to the NBA Finals for the second consecutive year with a win on Saturday in Game Six in Toronto.

The game was effectively over after the first quarter, when the Cavs' 37 points were the most they've scored in any quarter in this series.

The Raptors trailed by 18 after one period, and they did not surpass 37 points until the first two minutes of the third quarter.

The Raptors' 65-34 halftime deficit was the first time in franchise history they trailed by at least 30 points in any game, regular season or post-season.

Kyle Lowry had 13 points and six assists, and DeMar DeRozan scored 14 points for the Raptors after they totaled 67 points in Toronto's Game Four win at home. The backcourt partners shot a combined 7-for-20 in Game Five.

Raptors center Jonas Valanciunas appeared for the first time in this series after battling a sprained ankle, and he scored nine points in 19 minutes.

Bismack Biyombo had seven points and four rebounds after dominating the paint during the Raptors' two wins in Toronto.

This time, however, the Cavs displayed the type of dominance they flashed in winning 10 straight to open the post-season.

The biggest key to the turnaround was Love, who struggled miserably during the two losses at Toronto and compounded matters by twisting his knee during the third quarter of Game Four.

Love made his first six shots on Wednesday and finished 8-for-10 from the floor, including 3-for-4 from the 3-point arc.

He shot 5-for-23 during the two losses at Toronto.