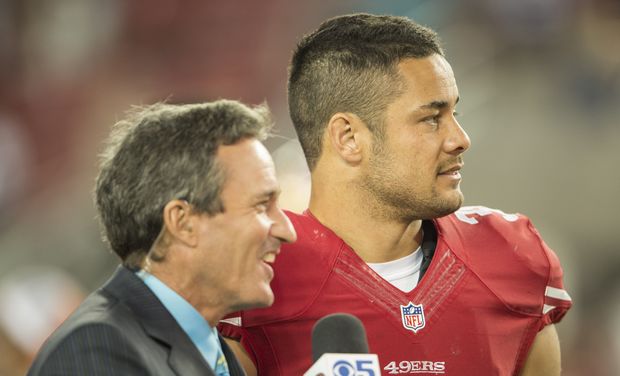 Kelly also doused speculation the 49ers were planning to cut Hayne, which led to the Australian making a face-saving exit.

The 49ers instead spoke highly of Hayne, praising his ability to pick up Kelly's new offence and excited about using his powerful, 188cm body and skills.

"We were excited. He's a big body and has a skill set."

Hayne and the 49ers announced on Monday that the 28-year-old had made the decision to quit the NFL to pursue his dream of winning a gold medal at the Olympics.

Kelly said he didn't speak to Hayne about possibly returning to the 49ers after his Olympics stint, although the team holds his NFL rights.

"We didn't even talk about that," Kelly said.

"He met with (49ers general manager) Trent (Baalke) first and came down and explained what he wanted to do - that he was going to play for Fiji in the rugby sevens.

Hayne faced plenty of competition for the running back and punt or kick return jobs on the 49ers' 53-man squad.

Kelly said the team's off-season was still young so he did not have a depth chart ranking where Hayne stood at each position.

Kelly wants to see players practising in pads, which will come closer to the start of the NFL season in September.

However, Kelly's tone showed that Hayne would have had a decent shot at making the 53-man squad.

"I was really impressed with how much he picked up," Kelly said.

"This is his second system.

"He's only been in the league for two years and has never played football before."