Manchester's police commissioner demanded an inquiry into the "fiasco" of a fake bomb left behind from a training exercise at Old Trafford that forced the abandonment of yesterday's Premier League game between Manchester United and Bournemouth. 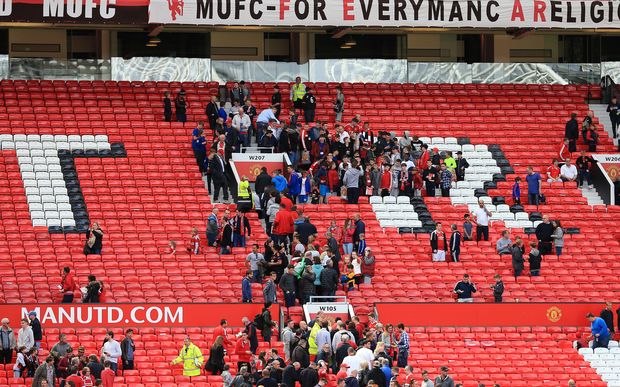 His call came as the head of the training company involved admitted full responsibility for the incident.

The device led to the evacuation of the stadium.

"This fiasco caused massive inconvenience to supporters who had come from far and wide to watch the match," Police and Crime Commissioner for Greater Manchester Tony Lloyd said.

It also "wasted the time of huge numbers of police officers and the army's bomb squad, and unnecessarily put people in danger", he said in a statement.

Lloyd added: "A full inquiry is required to urgently find out how this happened, why it happened and who will be held accountable."

Police said the realistic-looking device, which was destroyed in a controlled explosion, had been accidentally left in a toilet by a private contractor that was conducting a training exercise.

Manchester Utd said in a statement that the contractor had signed off for the device as having been recovered, along with 13 other devices, at the end of the exercise.

"That device could not have been detected by sniffer dogs on the routine match day search ... as it contained no explosives and was used in an exercise training handlers, not dogs," the club's Executive Vice Chairman, Ed Woodward, added in the statement.

"Once a live situation was identified, the Club and police had no option but to treat the matter as a potential terror threat; we could not have assumed it was a training exercise error," he said.

"Presented with the same situation in the future, we would take the same action."

The club was conducting a detailed evaluation with the help of police and would share its findings across the rest of the sport.

Chris Reid, a former policeman and now managing director of the contractor involved, Security Search Management & Solutions, later told reporters: "This mistake is entirely mine and I have to take full responsibility.

"I am absolutely devastated that a lapse in my working protocols has resulted in many people being disappointed, frightened and inconvenienced."

Two of the Old Trafford stands were evacuated about 20 minutes before kickoff.

The entire 75,000-seat stadium was cleared and the match was called off soon afterwards, the first time in 24 years that a Premier League match had been abandoned on security grounds.

The club said refunds would be given to those who bought tickets, with free entry to the rearranged match on Wednesday morning NZ time.

That would cost the club about 6 million dollars.

United are almost certain to miss out on qualification for next season's Champions League after local rivals Manchester City drew at Swansea City, putting City three points ahead in fourth place but with a much higher goal difference.

United are due to play Crystal Palace in the FA Cup final this weekend.