World number one Novak Djokovic fended off a resurgent Rafael Nadal 7-5 7-6 (4) in a pulsating battle to reach the semi-finals of the Italian Open. 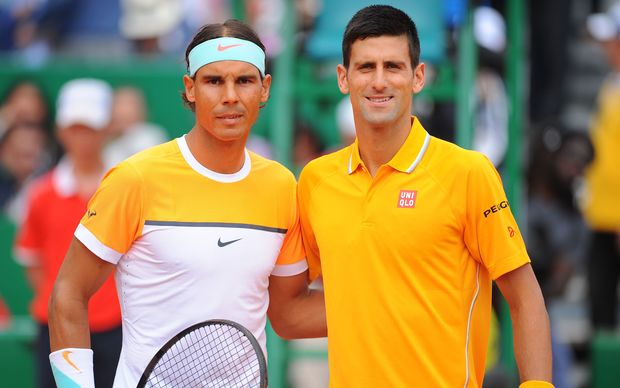 Novak Djokovic and Rafael Nadal pose before the start of their Monte Carlo semi-final, 2015. Photo: PHOTOSPORT

In the women's event, top-ranked Serena Williams was in dominant mood as she crushed Russia's Svetlana Kuznetsova 6-2 6-0 to advance to the last four.

Nadal led Djokovic 4-2 in the first set and had five set points on serve at 5-4 in the second but his opponent held firm for a bruising clay-court victory which took two hours 24 minutes.

It was his seventh straight win over the Spaniard and 11th in 12 meetings. However, it took all of the Serb's incredible defensive skills to withstand a much-improved performance from the nine-times French Open champion.

"I held my nerve at the clutch moments," Djokovic said in an on-court interview.

"Even though I had nervy beginnings to both sets, with some good games and good play in the crucial moments, I managed to win. It's a straight-sets win but it feels like we played five sets."

Coping better with a blustery wind that swirled around the Foro Italico, Nadal broke to lead 3-2 but Djokovic recovered to level at 4-4 and then won the first set on his fourth set point.

In the second set Nadal broke in the opening game and despite calling the physio because of pain in his left foot, he held his advantage to 5-4.

Serving for the set he held five set points but Djokovic saved the lot and broke back, eventually sealing the match on a tiebreak.

Djokovic next meets Kei Nishikori of Japan or Dominic Thiem of Austria.

In a repeat of their clash in last year's Davis Cup final, world number three Murray raced through the first set against Goffin for the loss of just 10 points.

After recovering from 3-1 down in the second, the Scot served for the match at 5-4 only to be broken thanks to a stunning pass by Goffin.

Murray broke again in the next game and served out second time round to set up a meeting with France's Lucas Pouille.

Having reached the semi-finals in Monte Carlo last month and the final in Madrid last week, Murray said he was enjoying himself on clay.

"I always said it was the surface I enjoyed playing on the most because it is very challenging," he added.

The other semi-final will be between last year's Wimbledon runner-up Garbine Muguruza of Spain, a 7-5 6-2 winner over Swiss Timea Bacsinszky, and American Madison Keys who beat Czech Barbora Strycova 6-4 4-6 6-3.