The Highlanders' ability to absorb the Crusaders' first quarter dominance gave them confidence rather than wearing them down, says coach Jamie Joseph, whose side ran out 34-26 winners in Dunedinon Friday.

The Crusaders dominated the first quarter, with two tries disallowed in the space of two minutes. 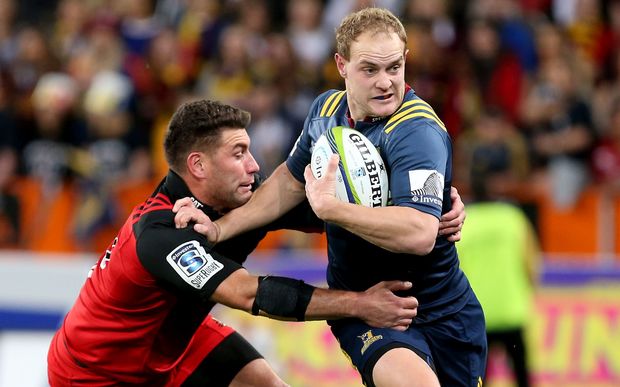 Highlanders centre Matt Faddes bursts past his Crusaders opposite Kieron Fonotia, on his way to one of his two tries. Photo: Photosport

"You could actually feel that we were under incredible pressure and for whatever reason we were abe to manage that pressure (by keeping the Crusaders) to nine points and then we struck and scored a try and that just really lifted our guys.

"Then we struck again, and I think it was just the way those tries were scored and the types of tries they were - they were just very inspirational," said Joseph.

The coach admitted luck played a part but he was proud of the resilience his side showed.

"There were moments there a lesser team would have bowed, particularly against the Crusaders, who are littered with All Blacks, but once we absorbed their pressure it didn't actually dent our confidence and actually made our resolve stronger - so really proud of the fellas."

Crusaders coach Todd Blackadder was philosophical after having two tries turned down in the first quarter.

Number 8 Kieran Reid had a try denied by the television match official for a knock on and two minutes later lock Luke Romano was denied one for a double movement.

Referee Chris Pollock asked the TMO to rule on Romano's effort but once he saw the replay on the big screen in the ground he was quick to rule it out, which bemused Blackadder.

"I thought we probably looked a little bit frustrated after being so dominant and getting no reward...it would have been nice for the TMO to make a call rather than the referee out there but it is what it is and what can you do? Being pissed off about it is not going to change the result," said Blackadder.

In the wash up, Blackadder didn't believe the loss would be a bad thing for his side in their quest for their first Super rugby title since 2008.