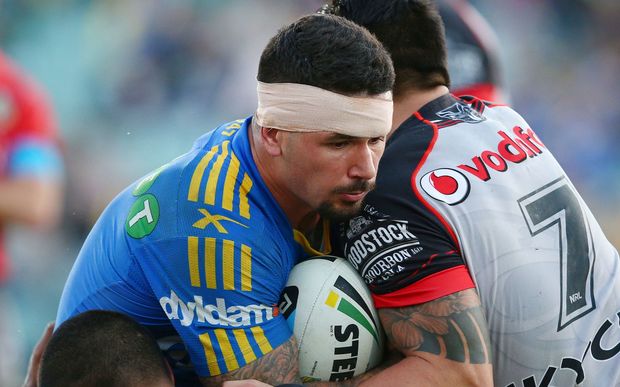 Needing to shed almost 620 thousand dollars from their books before Friday's NRL clash with South Sydney to be able to play for competition points, the Eels offloaded Peats to the Titans for the remainder of the 2016 season and 2017.

It wasn't immediately clear how much of the cap the Peats deal would free up for the embattled Eels who lost 12 competition points for salary-cap breaches.

But with the retirement of Anthony Watmough expected to be medically approved as a career-ending injury for the Eels, the club may well be close to being under the cap for the season.

The Titans issued a brief statement last night, saying the Peats deal had been done.

"Parramatta hooker Nathan Peats has tonight agreed to terms to play for the Gold Coast Titans for the remainder of 2016 and the 2017 seasons," it read.

"The 25-year-old, who has totalled 89 NRL games for Parramatta and South Sydney and has also played back row, will leave Sydney for the Gold Coast in coming days.

"There will be no further comment from the club at this stage."

News Corp Australia reported the Titans reached agreement on a $486,000 arrangement with Peats which will result in him pocketing $162,000 for the rest of this season.

He could be playing as soon as Monday for the Titans, who take on the Sydney Roosters on the Gold Coast.

The quintet has been provisionally suspended by the NRL over the Eels' alleged salary-cap rorts.

"You have five f......wits on the board who can't add up and it bites a player on the arse when it's not his fault," Geordi Peats told Fairfax Media.

"They reckon they've got nothing to answer for, they are pathetic."

Peats said the players were the ones who ultimately suffered for the board's mistakes, adding his son was a "pawn in the big game".

"(Nathan) is shattered, he's filthy. He's not happy, he can't believe it. They go and buy Kieran Foran and built well this year but obviously they didn't have the money to do it," he said.

"They told him yesterday they can't give him a contract for next year because they stuffed up (2017) as well. They don't know what they're doing."