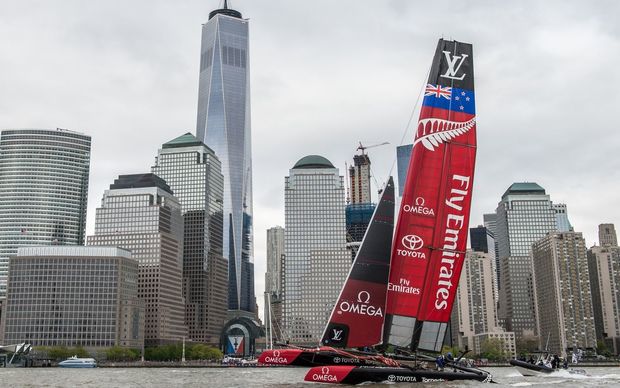 Emirates Team New Zealand has come from behind to win the final race - and with it the regatta - at the New York City stop for the America's Cup World Series.

The regatta win keeps Team New Zealand at the top of the world series standings.

Team New Zealand made a disastrous start to the last race going over the start line early and incurring a penalty.

The two-day event provided America's Cup skippers a chance to get back on the boats, assess the competition, and further develop the skills and tactics that could be crucial in next year's America's Cup in Bermuda.

Monday's three races were held on the Hudson River before thousands of spectators, watching in breezy sunshine on the New York promenade the 44-foot, twin-hulled sailboats known as AC45Fs rise up on retractable hydrofoil keels and rudders and create the appearance of flying over the surface of the water.

Lively wind from the northwest compounded the effect of the southbound current in the Hudson and Emirates Team New Zealand won the third race as a flukey breeze propelled them from the near the back of the pack to win the last race and the regatta.

"There was just some crazy shifts going on and really the race was never over until it was over.

"As we've sort of proved today, coming from behind off the start you can just claw your way back and if you keep your head in the game, anything's possible on the Hudson (river)."

Races in the ACWS have already been held in Portsmouth, England, Gothenberg, Sweden, Bermuda and Oman and will move to Chicago, Toulon, France and possibly Japan.

The boat designs will be scaled up to 50 feet for the America's Cup in Bermuda, which is set to begin in May 2017 and climax with the final two teams vying for the oldest trophy in sports, known as the "Auld Mug."

The New Zealanders had two third place finishes in the first two races.

The New York victory extends Team New Zealand's lead at the top of the overall standings.

There are three more events this year, the next is in Chicago in June.