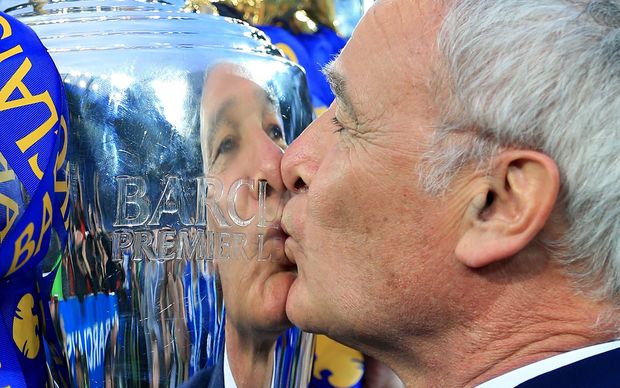 Leicester manager Claudio Ranieri is reflected in the silver as he kisses the EPL trophy. Photo: PHOTOSPORT

The 5,000-1 pre-season outsiders were given a guard of honour by Everton and serenaded by opera singer Andrea Bocelli during emotional pre-match celebrations, having clinched the title for the first time in their 132-year history on Tuesday when closest rivals Tottenham Hotspur were held 2-2 by Chelsea.

Vardy converted Andy King's cross in the fifth minute before King added a second in the 33rd.

England striker Vardy then bagged a 65th-minute penalty after being brought down by James Pennington before firing another spot-kick wildly over the bar.

Kevin Mirallas pulled a late goal back for the visitors.

"I always knew I would win a title," manager Ranieri told Sky Sports television after capturing his first major league crown in a 30-year career that has embraced 16 jobs. "I just never thought it would be here."

Goalkeeper Kasper Schmeichel said: "This is what dreams are made of. It's what you dreamed of as a kid".

Vardy, the second highest scorer in the Premier League this season with 24 goals, was overjoyed.

"I don't think I can put it into words," he said. "It's been a long and hard process to get here today.

"Nothing could spoil this celebration," added Vardy, reflecting on his penalty miss, "although I think my ball's ended up in someone's garden."