Cronulla back Gerard Beale will start for the New Zealand rugby league team against the Kangaroos on Friday night with fill-in fullback Peta Hiku ruled out with injury. 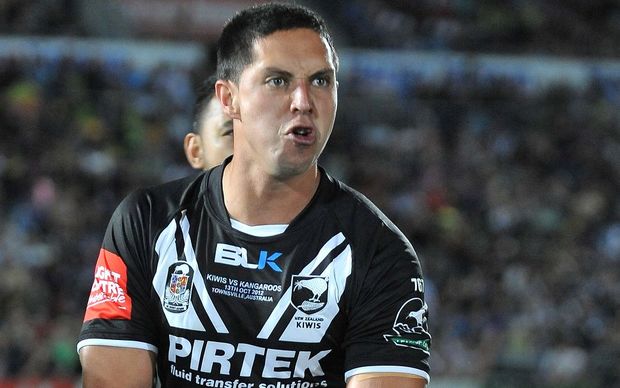 Hiku's unavailability is another blow to the Kiwis who's preparation has already been disrupted by a host of injuries, player withdrawals due to personal problems and the now infamous axing of the six Warriors players for mixing energy drinks with prescription drugs on a night out.

Beale has played seven tests for New Zealand between 2011 and 2014, and last took the field for his country in the 2014 Four Nations opener against Australia at Brisbane.

He was called into the Kiwis camp on Monday morning, after Brisbane second row Alex Glenn injured a calf for his Broncos club the night before and had to withdraw from the initial 18-man squad.

With Hiku now also ruled out with a knee injury, Beale moves into the centres and Brisbane utility Jordan Kahu shifts to fullback for Friday night's Test in Newcastle.

Other features of the Kiwis line-up include the selection of Melbourne second row Tohu Harris in the halves and debuts for Penrith wing Dallin Watene-Zelezniak and Parramatta forward Manu Ma'u.

Harris will partner the Warriors sole player, Shaun Johnson, in the playmakers role, with Kieran Foran on leave to deal with personal issues.

The Kiwis have further concerns over the fitness of Sydney Roosters centre Shaun Kenny-Dowall, who sported a moon boot on his foot at the team's training session yesterday.

He will be given some time to prove his readiness, with Parramatta's Brad Takairangi and Melbourne forward Kenny Bromwich joining the Kiwis squad to cover further casualties in the Test build-up.