Leicester City's Premier League title dream became reality today when one of the greatest sporting fairytales reached its conclusion in west London where chasing Tottenham Hotspur were held 2-2 by Chelsea. 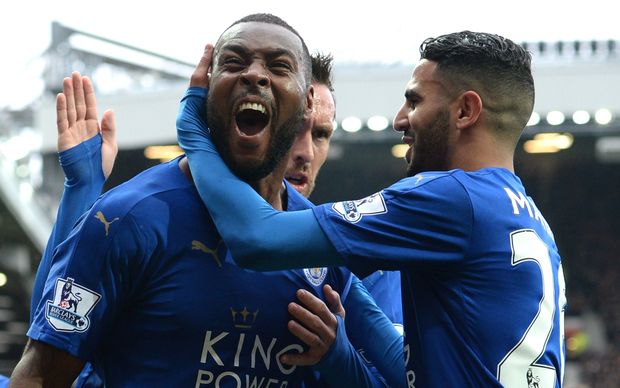 The result provoked an outpouring of celebration in the provincial English city and as far away as Thailand and Japan, while Leicester's players had watched nervously on television along with Foxes fans packed into local bars 160km away.

Goals from Tottenham's Harry Kane and Son Heung-min had looked like extending the title race to the penultimate week of what has been an unforgettable season.

But Gary Cahill gave Chelsea a lifeline before the hour and Eden Hazard, whose goals helped the Blues win the title last year, curled in a superb 83rd-minute equaliser to deflate Spurs and confirm Leicester as champions for the first time.

As tempers flared at the end of a red-hot London derby at Stamford Bridge, television pictures cut away to Leicester's players celebrating in the living room of their striker Jamie Vardy, whose 22 goals have under-pinned his side's challenge.

Elsewhere in Leicester, the city's biggest ever party began in earnest, with hundreds of fans gathering outside the stadium and thousands more celebrating in pubs and bars.

Leicester's unlikely journey from no-hopers to English champions has captivated sports fans worldwide, nowhere more so than in Thailand, home of the club's owners King Power.

Claudio Ranieri, the former Chelsea manager who has masterminded Leicester's rise since taking over at the start of the season, was celebrating the first major league title of his long managerial career.

"I'm so proud," the Italian, who was favourite in August to become the first manager to be sacked, said.

"I never expected this when I arrived. I'm a pragmatic man, I just wanted to win match after match and help my players to improve week after week. Never did I think too much about where it would take us."

Defender Wes Morgan, who scored a vital equaliser in the 1-1 draw at Manchester United yesterday, said: "Saturday can't come quickly enough. I can't wait to get my hands on the trophy."

With two games left, Leicester are seven points ahead of Tottenham and Saturday's home match against Everton will now become a glorious celebration for a club who were in the third tier of English soccer just seven years ago.

Tottenham had been hoping to claim a first English league title since 1961, when they won the double by beating Leicester in the FA Cup final, but fell short in agonising circumstances at Stamford Bridge where they have not won in 26 years.

"It's a massive, amazing season for Leicester, Claudio the players and the fans. They deserve it."

Unfashionable Leicester, 5,000-1 outsiders at the start of the season, have become English champions for the first time and are the first club to win a maiden English title since Nottingham Forest in 1977-78, having left the likes of Manchester City and United, Chelsea and Arsenal in their wake.

Oddly, the biggest match in Leicester's history was one they were not involved in as the final act of an absorbing title race was played out between last year's champions and a Tottenham side who have refused to give up the chase.

But Ranieri's intrepid team had already done the damage, churning out results to stay top of the table since Jan. 23 while their rivals fell by the wayside.

Since losing to Arsenal on February 14th, they won seven and drew three of their next 10 games.

Incredibly, Leicester spent half of last season bottom of the league before a late surge lifted them clear of relegation.

With Ranieri replacing Nigel Pearson as manager, they continued that momentum and from being pre-season tips for the drop, became title contenders as former non-league journeyman Vardy scored in a record 11 consecutive Premier League games.

Even when they hit the top in January, many thought Leicester would fade, as they did in 1963, the last time they were in with a chance of the title.

As the chasing pack thinned, however, Tottenham hung on to Leicester's coat tails but substitute Hazard's late goal sealed the destiny of the title, which left bookmakers up and down the country licking their wounds to the tune of millions of pounds.

"People will be talking about this in 100 years time," Sky Sports pundit and former Liverpool player Jamie Carragher said.

"For a team like Leicester to come and take the giants on with their wealth and experience -- I think it's the biggest thing to happen in football," he said.