Adelaide United claimed a long-awaited A-League title with a 3-1 win over Western Sydney in last night's Grand Final in Adelaide. 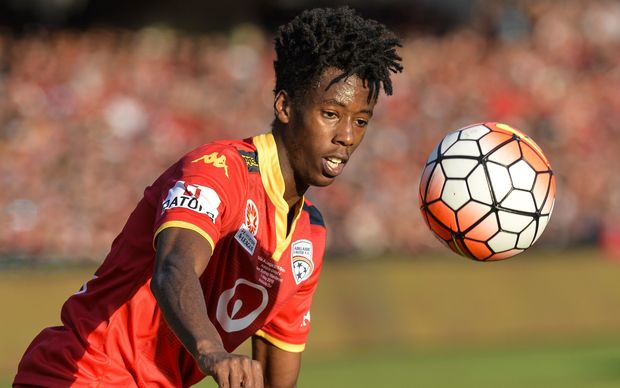 The defeat consigned the Wanderers to a third dose of heartbreak in the Australian championship decider.

Roared on by a sell-out Adelaide Oval crowd and inspired by some Latin magic, the home side had to fight off a spirited second-half fightback by the Wanderers, who were playing their third Grand Final in four years.

However, the Tony Popovic-coached Wanderers, who rallied from a 3-0 deficit to win their semi-final against Brisbane Roar last week, were never going to lie down.

They hit back through defender Scott Neville, who hammered a long-range strike into the right corner of the net in the 58th minute.

The visitors pushed desperately for an equaliser but substitute Pablo Sanchez put the game out of reach in the final minute.

The Cadiz-born forward swooped on a defensive error at the edge of the area before slamming the ball home to send the red-clad crowd of 50,000 into delirium and seize a championship that went begging in the 2006-07 and 2008-09 finals.

"Finally, it's been a long time," veteran Reds forward Bruce Djite said in a pitchside interview.

"There's something about this group... It's a testament to everyone involved in the club.

"There was no-one going to beat us today."

The championship was also a triumph for Spanish coach Guillermo Amor, who engineered a huge turnaround in the team's fortunes after they were winless and bottom of the 10-team league after eight rounds of the season.

"What a year. Today's a great day.... A special, special day," the former Spain midfielder and Barcelona stalwart said.

The Wanderers, who made the final in their debut 2012-13 season and again the following campaign, were gallant in defeat but will lament a number of missed chances in front of goal.

Former Australia defender Popovic, at the helm for all three final losses, was crestfallen.

"They gave it their all. In the end, that first half we made a couple of mistakes in possession and we got punished," said the 42-year-old, who guided the team to the Asian Champions League title in 2014.

"Of course, we're proud of what we've done this year... But at the moment, it's tough to take."