The depleted New Zealand Warriors have managed to beat the St George Illawarra Dragons 26-10 in Auckland. 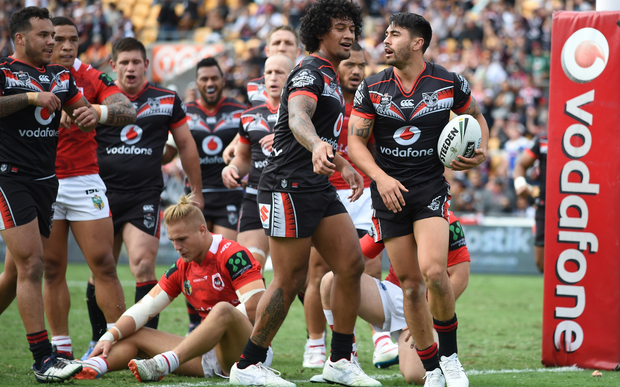 After a difficult week where six players were axed for breaking team protocol, the Warriors suffered a further blow just before today's game with a hamstring injury ruling Thomas Leuluai out of the ninth-round clash.

But the Warriors competed from the start and at half-time led the visitors 18-10 at Mt Smart Stadium.

The Warriors scored four tries to the Dragons two.

Johnson also kicked 5 goals for the home side.

Leuluai was again set to team up in the halves with Shaun Johnson but his place was taken by Robson.

The Warriors were already without the injured Simon Mannering, Roger Tuivasa-Sheck and Tuimoala Lolohea as well as the six players who were axed after breaking team protocol.

Manu Vatuvei, Ben Matulino, Bodene Thompson, Sam Lisone, Albert Vete and Konrad Hurrell were demoted to the club's Premiership side to play in the main curtain-raiser to the NRL match.

The Warriors head coach Andrew McFadden confirmed a much-changed line-up which included NRL debutante in Toafofoa Sipley and Shaun Lane starting in the second row in his first NRL outing for the club.

Jazz Tevaga was promoted to start at hooker - Issac Luke to the bench - with James Gavet into the front row replacing Matulino and John Palavi starting at loose forward with Charlie Gubb moving to the interchange.

Sipley and Sione Lousi completed the bench alongside Luke and Gubb.

The absence of 10 key players meant the Warriors were stripped of a combined total of more than 1000 NRL appearances for the encounter.