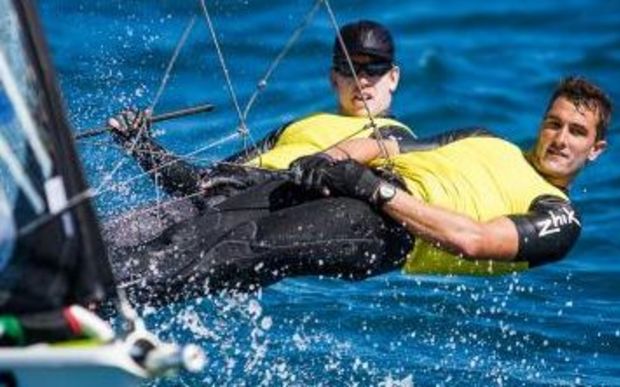 Peter Burling and Blair Tuke on their way to their 25th straight 49er regattta win, in Bacelona. Photo: Supplied

The victory extends their winning streak to a stunning 26 consecutive regatta victories in the class.

Tuke said, "We were a bit disappointed we finished how we have but at the same time we sailed really well this week and it's been great fun to have some pretty strong winds."

With the Olympic Games now less than 100 days away from starting the pair see this victory as another stepping stone towards Rio 2016.

In the women's 470 class Jo Aleh and Polly Powrie have slipped to sixth overall in the standings.

A disappointed Aleh said it was a rough day.

"So with today that puts us rather out of contention for tomorrow's medal race… We are in 6th place and no chance of a medal. But still, it's a good chance to practice another medal race."

Meanwhile Josh Junior heads into the Finn medal race in fourth overall after finishing third on the penultimate day.