Suspended UEFA president Michel Platini has appeared before sport's highest tribunal to appeal against his six-year ban from soccer and said he was optimistic he would win his case, with FIFA ex-president Sepp Blatter among the witnesses. 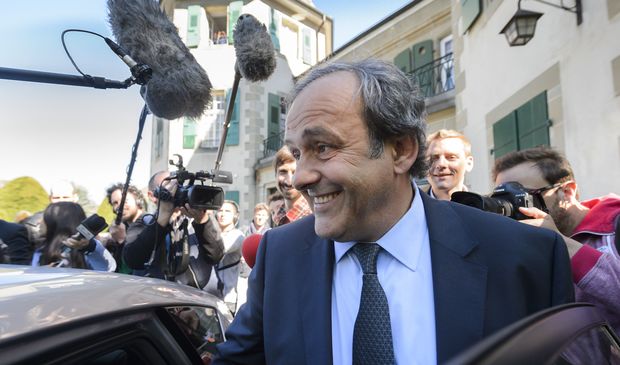 Suspended UEFA president Michel Platini as he leaves the Court of Arbitration for Sport. Photo: AFP

Platini, who arrived in a taxi for the hearing at the Court of Arbitration for Sport (CAS), is hoping that the ban will be overturned in time for the Euro 2016 tournament, which will be held in his native France in June and July.

CAS said a decision could even be made as early as next week, depending on how the closed, day-long hearing progresses.

"Today, we're at the beginning of the game, a new game, in the final ... I hope the outcome will be good," said Platini, who was the favourite to succeed Blatter as president of soccer's global governing body FIFA before he was banned.

"Of course, I am optimistic that we are going to win," he told reporters, smiling and appearing relaxed.

Platini was banned for eight years in December along with Blatter over a payment of 2 million Swiss francs ($2.08 million) made to the Frenchman by FIFA with Blatter's approval in 2011 for work done a decade earlier.

FIFA's ethics committee, which imposed the ban, said the payment, made at a time when Blatter was seeking re-election, lacked transparency and presented conflicts of interest.

Both men denied wrongdoing and had their bans reduced to six years by FIFA's Appeal Committee in February.

"We don't know exactly when the final decision will be rendered, hopefully it could be early next week or a little later depending on what the parties today tell us," Reeb told reporters.

UEFA will hold its annual Congress in Budapest on Tuesday but Reeb could not say whether the decision would come before it opens. "Probably I will know about that later today," he said.

Blatter, whose own appeal will be heard separately at a later date, arrived three hours later for his testimony and said only, "I am a witness in the case of Mr Platini today and I will answer the question as a witness, thank you for your interest."

Villar, head of the Spanish football federation (RFEF), arrived and then left the hearing without answering questions.