Eliud Kipchoge produced the second fastest run in marathon history to successfully defend his London Marathon title while his Kenyan compatriot Jemima Sumgong showed remarkable courage after a fall to win the women's race on Sunday. 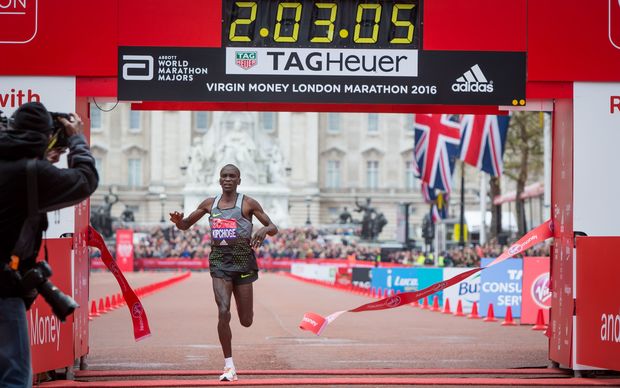 There was sheer brilliance from the elegant Kipchoge, who retained his crown in a course record 2 hours 3 minutes 5 seconds and looked faintly disappointed to finish an agonising eight seconds outside Dennis Kimetto's landmark of 2:02:57.

From Sumgong, though, there was nothing but bravery as the 31-year-old picked herself up after banging her head on the ground when she was tripped at a water station eight kilometres from the finish.

Astonishingly, the experienced Kenyan battled back into contention and prevailed in a duel with last year's winner, Ethiopia's Tigist Tufa, for her first major marathon title since Rotterdam three years ago.

Kipchoge, the former teenage track phenomenon whose performance confirmed him as one of the greatest all-round talents seen in endurance running, won his sixth of seven marathons with a sublime display.

In cool conditions perfect for a stellar field, Kipchoge demolished his opponents one by one as they could not live with the world-record pace. He finally broke away from fellow Kenyan, New York champion Stanley Biwott, in the final three kilometres.

In third place was Ethiopian distance great Kenenisa Bekele, who was over three and a half minutes behind the champion in 2:06:36. World record holder Kimetto finished ninth in 2:11:44.

Kipchoge admitted that he realised his shot at the world record was probably gone when he slowed between the 30km and 40 km marks. "I think I lost 30 seconds there but I'm still happy I ran the course record," he said.

Usually these days, any revision to the world marathon marks are expected to happen on the record-friendly Berlin course, so there is an argument that Kipchoge's was the best marathon performance ever on the more challenging London circuit.

Asked if the world record time was now within his grasp, he smiled: "Exactly."

Kipchoge was even more delighted that, in a race which was effectively doubling as an Olympic trial for a stellar field of Kenyan athletes, he must have confirmed his place for Rio de Janeiro, where he will start a hot favourite.

"I'll be more than happy when I hear my name," he said.

Sumgong hit her head after she was clipped from behind in a collision that also saw Ethiopian Aselefech Mergia and Kenya's two-time winner Mary Keitany tumble.

Yet even though she ended up rubbing her head in pain as she got to her feet, she still chased down the leaders and eventually outduelled last year's surprise winner Tufa by five seconds.

The millionth finisher in the race's 35-year history also crossed the line on The Mall, although his or her identity will not be confirmed until the results have been studied.