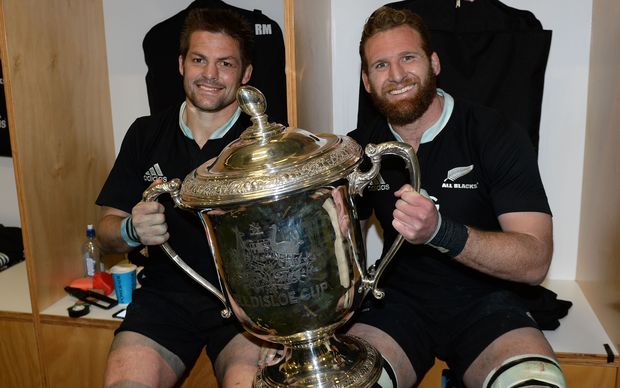 Richie McCaw and Kieran Read in the sheds after retaining the Bledisloe Cup Photo: PHOTOSPORT

New Zealand Rugby says the Australian union hasn't raised with it the possibility of playing a Bledisloe Cup Test in London or New York.

From, 2020 Australia is considering staging a Bledisloe Cup Test at Twickenham and other venues in Australia and around the world during a rebuild of Sydney's ANZ Stadium.

The ARU is committed to playing a Bledisloe Cup game in Sydney every year until 2021 but with the venue to get a facelift from 2018, matches between the Wallabies and All Blacks will move.

Such a move would only fall in the years in which Australia hosts two matches and with 2019 a World Cup year, it leaves 2020 as the first year of an overseas option.

In a statement the chief executive of New Zealand Rugby Steve Tew said the option hadn't been raised by the ARU so it hasn't been considered.

Playing overseas would be lucrative for the union and Tew isn't ruling it out saying it must align with their strategy to boost the All Black global brand and also fit with player welfare considerations.

"Argentina are playing their home game against us at Twickenham in the Rugby Championship this year, so there is a precedent there," ARU general manager Rob Clarke told News Corp Australia.

"Even a city like New York, where there is a strong Australian and New Zealand expat presence, have expressed interest in getting more international rugby content. It is a consideration for us, certainly."

It would mark the first time a Bledisloe Cup match has been played outside of New Zealand or Australia in a three-match series.

Hong Kong has twice hosted matches and Tokyo once, however both were money-making fourth games added onto the end of the annual series.