It'll be an all New Zealand affair in Oceania Football's Champions League final this Saturday after Auckland City FC and Team Wellington cruised past their semi-final opponents in Albany yesterday. 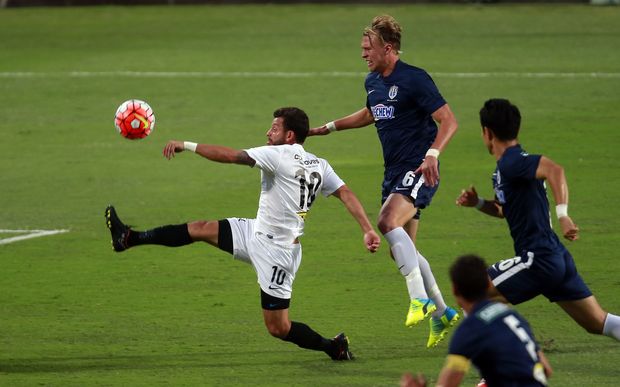 Team Wellington and Auckland City FC will meet in the final of the OFC Champions League final for the second consecutive year. Photo: PHOTOSPORT

Most of the goal-mouth action took place in the day's opening game, Auckland keeping their hopes of a sixth consecutive title alive with a 4-2 victory over Tahitian side AS Tefana.

The second match was a far tenser affair, New Caledonia's AS Magenta shading the possession but struggling to get their noses in front before Wellington secured the win with a couple of quick-fire late goals to win 2-0.

Auckland and Wellington will now meet in Saturday's OFC Champions League final for the second straight year with the capital men looking to repeat their feats of the ASB Premiership, a trophy they lifted at the expense of the Navy Blues.

City will get the chance to make sure that doesn't happen again after a first-half goal blitz against Tefana, Micah Lea'alafa and Clayton Lewis both scoring doubles to put them 4-1 ahead at the break.

"It was a very difficult game and we were lucky that we went in front early on," coach Ramon Tribulietx said.

"They're a good team and managed to threaten us a few times. These games have a lot of tension and we felt that but we're very happy to be in another final."

The day's second game followed a much different script, Wellington having to wait until the last quarter of an hour to breach the defence of a Magenta side that had proved a more-than-worthy adversary.

The New Caledonians enjoyed nearly 60 per cent of the possession in a tight first half but it was Wellington who could have taken the lead, Tom Jackson being denied in a one-on-one situation by goalkeeper Jelen Ixoee after a lovely pass from Alex Feneridis.

Clear-cut chances continued to prove hard to come by for both sides and the thoughts of those in attendance must have been turning to extra-time as they clock ticked down. But Wellington striker Jackson had other ideas, helping his team put one foot in the final by finding the net twice in as many minutes.

Wellington were missing the services of a pair of key players in captain Bill Robertson and Ben Harris - through suspension and injury respectively - and coach Matt Calcott is looking forward to welcoming them back for the final.

"It probably wasn't our best performance today but we're very happy," he said.

"There were some pretty tired bodies out there but we've got some fresh ones coming in so it was great to get through against a very good Magenta side."