The French golfer Jean Van de Velde is preparing to revisit the spot where millions of TV viewers watched his British Open victory hopes die a watery death in 1999.

Van de Velde added his name to the list of great sporting calamities when he took a triple-bogey seven at Carnoustie's 18th, having arrived on the tee holding a three-stroke lead with one hole to play.

The sight of him removing his shoes and socks and standing ankle deep in water in the Barry Burn contemplating a recovery shot remains one of golf's abiding images. 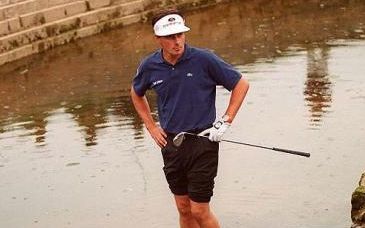 Jean Van de Velde finds the water The Open in 1999. Photo: The Open

The Frenchman will return for another crack at the Scottish course in July for his debut in the British Senior Open.

"I know it is part of history. It is part of my life as well as a golfer," Hong Kong-based Van de Velde said in a news release.

"I don't get tired of people talking about 1999 and reminding me about what happened. I am lucky enough to still be involved in golf but I am not as exposed as I was before so it doesn't come up as much in conversation."

Big-hitting American John Daly, the 1995 Open champion at St Andrews, also joins the senior ranks this year and will be at Carnoustie, as will 2004 champion Todd Hamilton.