New Zealand baseball pitcher John Holdzkom has been thrown a Major League Baseball lifeline, joining the Chicago White Sox after being dropped by the Pittsburgh Pirates. 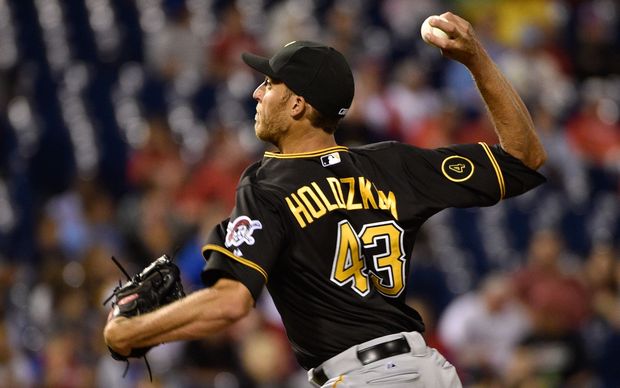 Holdzkom shot to fame in September 2014 with some stand-out performances to help the Pirates reach the play offs, but nagging shoulder injuries kept him in the minors for all of 2015 before his release, and the 2.05 metre tall pitcher isn't taking anything for granted.

"It's always exciting to know that a team wants you to play for them and I will cherish this opportunity," said Holdzkom from his home base in Californina. "The main focus now is to get healthy and wherever they send me, I will be happy to report."

Holdzkom was a fourth round pick of the New York Mets in the 2006 Major League Baseball First-Year Player Draft, playing four seasons (2006-2008 and 2010) in the Mets system, splitting time between the Rookie-level Gulf Coast League Mets and Kingsport Mets, as well as the Class A Savannah Sand Gnats.

After not appearing in 2011, Holdzkom spent 2012 with the Cinicinnati Reds' Class A Advanced affiliate, the Bakersfield Blaze of the California League, finishing the year pitching for the Diamondblacks in Taiwan in the World Baseball Classic Qualifiers before playing in a couple of seasons in the Australian Baseball League (ABL).

Shortly after his second stint in the ABL, Holdzkom transformed himself from a starting pitcher to a flame-throwing reliever, reaching speeds of close to 100 mph (160km/hr) and drawing international attention for his skills on the mound, but unfortunately after his magical run in 2014 his velocity dropped last year due to his shoulder problem and this led to his release from Pittsburgh.

Last year also ended badly for Holdzkom after his brother Lincoln was killed in a motor vehicle accident just before Christmas and his injury plagued 2015 meant he wasn't released by the Pirates to play for the New Zealand Diamondblacks in the recent World Baseball Classic Qualifier, which was a big disappointment for him, he recalled.

"It was gut wrenching to miss the WBC, because in my eyes, international competition is the most pure form of competition," said Holdzkom, who added that he was excited by the change in scenery and his chances to move up to the majors with the White Sox who have gotten out of the gate quickly this year and are at the top of the standings in their respective division.

American born with a Kiwi father, Holdzkom pitched well for New Zealand at the World Baseball Classic qualifier in Taiwan in November 2012 and was signed by the Pirates on the back of some sparkling form in the American Association of Independent Baseball, maintaining a miniscule 1.17 ERA in nine appearances (runs allowed per inning) out of the bullpen for Amarillo in 2014.