The New Zealand driver Scott McLaughlin has celebrated a perfect weekend with victory in the second race of the V8 supercars championship at Phillip Island. 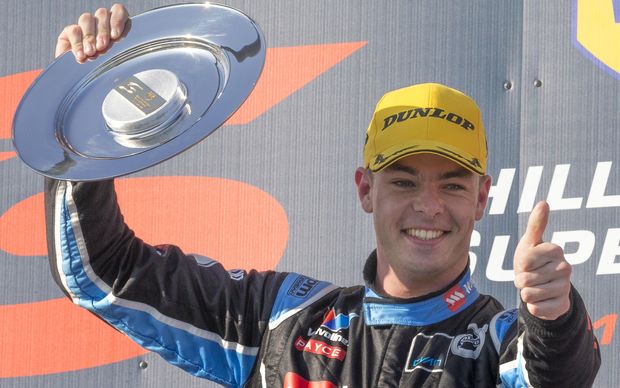 It is the first time McLaughlin has managed back-to-back wins after claiming the Sprint round at the Melbourne cicuit on Saturday.

It proved a stunning weekend for the Gary Rogers Motorsport Volvo driver, who broke the lap record in practice on Friday, won pole on the way to winning on Saturday and repeated that with a second pole and commanding win on Sunday.

McLaughlin had run 44 races since his last victory until the win on Saturday but his performances over the weekend were such that he has jumped to second place in the championship, just 15 points behind the new leader Jamie Whincup.

"I was yelling so much under the helmet that I've lost my voice," McLaughlin said.

"We are coming back and I think we will have a good one this year.

McLaughlin aside, Sunday was not so kind to the Kiwis with Coulthard's Team Penske Ford suffering a major misfire and engine failure before the start of the race, reducing him to an onlooker, while van Gisbergen was never on the pace, although rushed home with new rubber after a late pit stop to sneak into the top-10.

Van Gisbergen is sixth in the championship and Coulthard 15th while of the other New Zealanders Andre Heimgartner is 24th and Chris Pither 26th.

McLaughlin had to fight off an aggressive start from Whincup off the line, with the pair racing door handle to door handle at 260kph through the opening corners before the Kiwis managed to eke out an advantage.

The V8 Supercars Championship heads to Perth for another SuperSprint round on 6-8 May.