The Wellington Phoenix says skipper Andrew Durante's reputation and character has been called into question by A-League's disciplinary process.

The club has sought an explanation from Football Federation Australia on its disciplinary procedures following the reduction of a two match suspension to just one game for Melbourne Victory player Besart Berisha.

Berisha was red-carded and subsequently handed a two-game ban by the A-League match review panel for kicking out at Phoenix skipper Andrew Durante while getting treatment during Victory's 4-1 win on April 2nd. 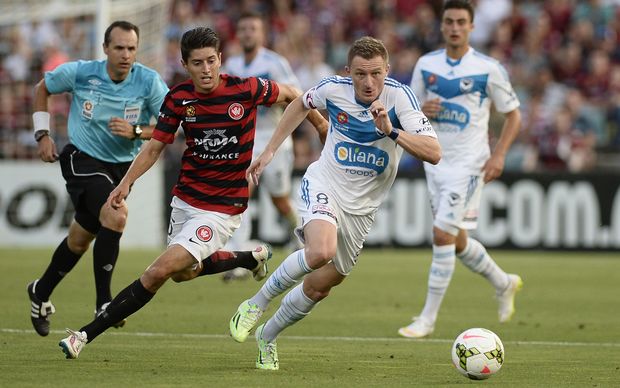 Melbourne Victory's Besart Berisha had his two match ban reduced to only one game. Photo: Photosport

But the Melbourne club appealed the decision and the supsension was reduced to one match which allowed Berisha to play in Friday night's playoff loss to Brisbane Roar.

In a statement the Wellington Phoenix said it is concerned with aspects of the disciplinary process and has sought an explanation from Football Federation Australia.

"The Wellington Phoenix is most disturbed that the overwhelming video evidence in this case was ignored in favour of two still photographs, along with testimony by employees of Melbourne Victory, which has subsequently called into question the reputation and character of our club captain Andrew Durante," the statement said.

The statement went onto say Durante, who has played over 200 A-League games, has an excellent disciplinary record but the club is "concerned unfounded comments about his actions in the incident have been made public."