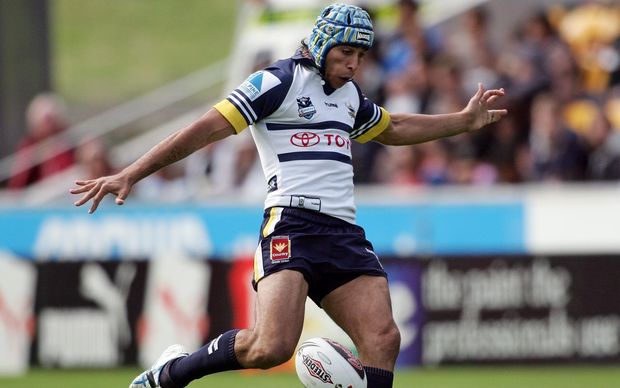 The Cowboys scored eight tries to three to go top of the table.

It was a battle between the league's two most recent premiers, but the game only served to show how far removed the Rabbitohs are from their 2014 title.

The Cowboys, on the other hand, executed to something resembling perfection on both sides of the ball as they continued their brilliant run at the homestead.

Hooker Jake Granville was starting his first game since round one and proved he can have an impact at any time of the game when, in the fifth minute, he attracted two defenders on a blindside dummy-half run before turning the ball inside to prolific back rower Gavin Cooper for the first points of the night.

Souths became the first opposition team to score in 160 minutes of football at the northern fortress when Townsville native Chris Grevsmuhl exploded through the line to touch down right next to the posts, but from that point on, it was almost all Cowboys.

Johnathan Thurston collected his own grubber to score in the 15th minute after Luke Keary was pre-occupied with Michael Morgan.

Both halves handled in the lead-up to Justin O'Neill's four-pointer in the 27th minute and Morgan threw the final pass for Kyle Feldt to cross out wide just after the break as the avalanche continued.

Ethan Lowe and Antonio Winterstein added tries of their own before O'Neill touched down for his second in the space of five minutes around the one-hour mark.

The Cowboys' streak was halted by a 69th-minute try for Sam Burgess after Thurston failed to clean up a kick in the in-goal, but Morgan put the hosts straight back into the points in the 71st when he was on the end of a beautiful piece of interplay between Granville and Thurston through the middle of the field.

South Sydney's returning half-back Adam Reynolds added a consolation try with four minutes remaining but, even with victory well and truly secured, the Cowboys aimed up in defence to end the game, weathering a late charge by the Rabbitohs to come out on top.