Tickets to watch English football Premier League leaders Leicester's final home game are being offered for $30,000 a pair through an online re-sale website.

The match against Everton early next month, which could see the Foxes become champions, sold out in 90 minutes today.

But within hours, individual tickets were being advertised for more than $6,000 each and a pair for much more.

The club said it would "take action against any ticket touting" or attempts to "resell tickets above face value". 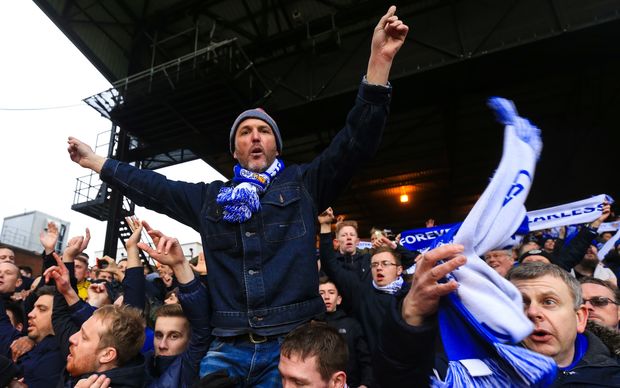 Leicester fans keen to see their side win the English Premiership are being forced to pay exorbitant amounts for tickets. Photo: Photosport

They play West Ham and Swansea at their King Power Stadium then Manchester United at Old Trafford, before the game against Everton next month, followed by the final match of the season away to last year's champions Chelsea on may 15th.

One fan who contacted BBC Sport said he had missed out on a ticket, despite having a membership package and having been to all but three home games this season.

"This season is something we never expected and will probably never happen again in our lifetimes," said the supporter, who wished to remain anonymous.

"Now I won't be there to potentially celebrate us winning the Premier League. It is a bit of a 'here's what you could have won' moment.

"The club have been brilliant with fans these past couple of seasons. But I think there will be a few questions for them to answer as to how this has happened. I can't see how ordinary fans could afford to pay $30,000 for two tickets - looking at some of them, it's the price of a second-hand car."

Leicester posted on their own website that the Everton game had seen "unprecedented demand" and sold out in "record time", with the "vast majority" of higher-tier members able to get a ticket.

Membership does not guarantee a ticket, the club told the Leicester Mercury.