Britain's Anthony Joshua lived up to his billing as the new superstar of heavyweight boxing when he stopped Charles Martin in the second round with a demonstration of brutal power to claim the American's world IBF title on Saturday. 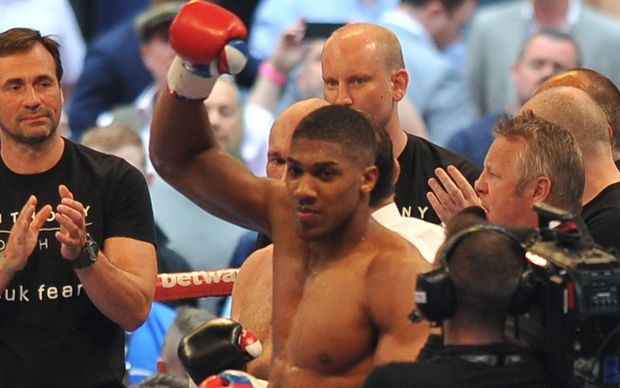 Joshua became the first boxer in history to hold the Olympic super-heavyweight crown and a version of the world heavyweight title simultaneously with his stunning triumph at the O2 Arena, a few miles from where he won gold at the London 2012 Games.

The 26-year-old handed champion Martin his first career loss to grab the title with his 16th knockout win in his 16th professional fight, putting him down twice in the second round with magnificent right hands in front of 15,000 fans.

On the second knock down, Martin tried to beat the count and was on his feet at nine but the referee felt he was in no state to continue and ended the contest as Joshua landed his world title after 1 minute 32 seconds of the second round after only 34 rounds of boxing in his three years in the paid ranks.

It was so conclusive that Joshua, who looked as if he had just enjoyed a leisurely sparring session, told the crowd he was going back to his dressing room to work on the pads.

"It's only a quarter of the way there. There's still a lot of work to be done. I've got people like (fellow British heavyweights) David Haye and (WBA and WBO champion) Tyson Fury calling me out so I need to keep improving," Joshua said in an interview in the ring afterwards.

"This was one for myself. I told you I was going to come out and punish him."

Joshua reiterated that his ambition was to unify the heavyweight title, which will mean having to dispose of Fury and American Deontay Wilder, the American WBC champion.

On this evidence, he has every chance of doing so, even though Fury, who defeated long-standing champion Wladimir Klitschko of Ukraine last year, professed to be unimpressed.

"So AJ gets a belt, looked slow ponderous, & still looked like a bodybuilder, let me slay the lamb," he wrote on Twitter.

It was a demonstration of skill as well as merciless power from the relatively novice professional Joshua, who was expected by many to receive a genuine test from the first southpaw opponent he has met as a professional.

Yet from the moment the dreadlocked Martin felt the thud of Joshua's right fist in the opening round it quickly became clear he had never experienced such ferocity. One roundhouse left hand made him wince as the home fighter easily won the first round.

That was just a softening up exercise.

After a minute of the second round, Joshua slipped Martin's southpaw lead and unloaded with a booming right hand that sent the American sprawling on to the seat of his pants.

Martin beat the count but looked dazed and Joshua stalked him calculatingly before unleashing another huge blow.

This time, Martin again just about beat the count after staggering to his feet but, though he protested, the referee had no choice but to call off the contest.

Martin, who had lost his crown after a 94-day reign, raised the arms of his conqueror and said afterwards: "He was the better man. I got hit by a right hand I didn't see and that cost the fight.

"I was OK but the referee came over at six, I got to the knee at seven, took a breath and when I stood up he was at 10.

"He's a great fighter, I want to say that, it was just that his right hand was fast, I didn't see the right. He's got good speed."