Canterbury swimmer Matthew Hutchins has gone under the qualifying standard for the Rio Olympics in the 400m freestyle on the third day of the Canadian Olympic Trials in Toronto. 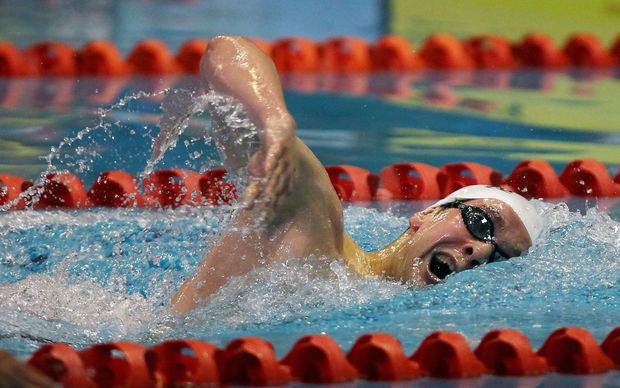 The Canadian Olympic Trial is the second official trial for New Zealand swimmers to meet the qualifying times to be considered for the Rio Olympics.

Hutchins, on scholarship at the University of Wisconsin, joins Commonwealth Games representative Corey Main who bettered the qualifying standard in Toronto yesterday in the 100m backstroke.

Hutchins, from the Wharenui club in Christchurch, was timed at 3:49.84 in his heat of the 400m freestyle which is over half a second inside the FINA A qualifying standard. He was on a similar split in the B Final in the evening programme, winning in 3:50.12, also under the selection standard.

"Being able to swim under 3:50 in the morning took so much pressure off myself. I wanted to go faster tonight but to do two times under the qualifying is pleasing," Hutchins said.

"People have asked me how it feels to have got the Rio time but it hasn't really sunk in yet. Once I get back to Madison out of racing mode and I can look back at what I have done, not just this week but the past season, and sit down with my coaches to set my goals, then it will probably sink in."

He will now set himself for the 1500m freestyle later in the meet, having won the bronze medal in the one mile at the recent NCAA Championships.

"My stroke is designed for long distance so having done a good time in the 400 is always a good confidence-boost going into the 1500 later this week."

Second in the B Final was Georgia-based Kevin Litherland, who qualified for the trials along with his brother Mick, with their father a New Zealander. They are part of the Litherland triplets with the other brother Jay to compete at the US Trials.

It brings the tally of New Zealand swimmers who have achieved the FINA A standard to eight swimmers in 10 events so far.

None of the other New Zealanders managed to go under the FINA A times. North Canterbury's Natasha Lloyd (Auburn University) was second in the 100m breaststroke B Final in 1:09.53, while Alex Peach (Delta State University, United club) and Jonathan Rutter (Powel Crosley University, Roskill club) were second and third respectively in the 200m breaststroke in 2:13.29 and 2:16.83 respectively.