The West Indies have been quick to take fire at their doubters after winning the men's World T20 cricket title by beating England by 4 wickets in the final in Kolkata. 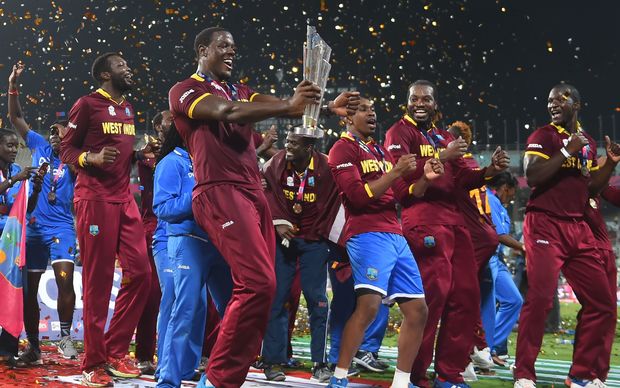 Captain Darren Sammy said there were a lot of off-field issues and people were wondering whether they would play the tournament.

"We felt disrespected by our board, Mark Nicholas [a commentator] described our team as a team with no brains. All these things before the tournament just brought this team together."

He praised his team for putting those adversities aside as well as the coaching staff led by head coach Phil Simmons.

Sammy mentioned new manager Rawl Lewis, who went to great lengths to get uniforms printed for the side in time for the tournament.

"I got to give credit to the entire team here, it was us in our own little circle."

He said the side had a lot of support from back home but he could not say the same for their cricket board.

"I'm yet to hear from our own cricket board. That is very disappointing."

After an extraordinary final, Marlon Samuels was named Man of the Match for the second time in four years after his unbeaten 85 off 66 balls kept West Indies in their chase after a poor start and gave Carlos Brathwaite the chance for his astonishing finish.

As the emotions flowed for West Indies, Samuels made reference to recent comments from Shane Warne in the commentary box - the pair had an infamous run-in during the Big Bash in 2013 - and always had confidence in himself to produce another key performance in a final.

"I woke up this morning with one thing on my mind. Shane Warne has been talking continuously and all I want to say 'this is for Shane Warne'. I answer with the bat, not the mic.

"We are champions again and want to continue to move from strength-to-strength. This is a win for the Caribbean. It means a lot. I didn't have much to say to Carlos, but told him to swing hard."

Brathwaite hit England's Ben Stokes for four successive sixes at the start of the last over to snatch a thrilling win as the Caribbean side became the first team to win the title twice.

Needing 19 off the last over sent down by Stokes, Brathwaite exhibited nerves of steel to complete the chase in stunning style and trigger wild celebrations amongst his jubilant team mates who invaded the Eden Gardens pitch.

England's death overs hero Stokes was left distraught after failing to contain Brathwaite, who had a memorable night having scored 34 with the bat after earlier claiming 3-23 with the ball to restrict England to a modest total.

Marlon Samuels played a key role in reviving the 2012 champions' chase, but it was brilliant Brathwaite's blistering total off 10 balls that saw them home.

Put in to bat, England got off to a horrendous start before Joe Root hit a fluent 54 to help the 2010 champions post a competitive 155 for nine wickets.

Root added 61 in partnership with Jos Buttler (36), who hit left-arm spinner Sulieman Benn for back-to-back sixes before holing out in the deep.

Dwayne Bravo (3-37) struck twice in the 14th over and Root perished in the next over, trying to scoop a Brathwaite (3-23) delivery.

West Indies wobbled early in their chase after part-time spinner Root dismissed Johnson Charles and the dangerous Chris Gayle in his the first three balls to peg them back.

Samuels added 75 runs with Dwayne Bravo (25) to steady the ship before Brathwaite provided the remarkable late fireworks to secure an emotional victory.

Earlier the West Indies women beat Australia by eight wickets in their final.