A world record to Paralympics star Sophie Pascoe and two more swimmers under the qualifying standing were the highlites of the penultimate night of action at the 2016 New Zealand Open Swimming Championships in Auckland. 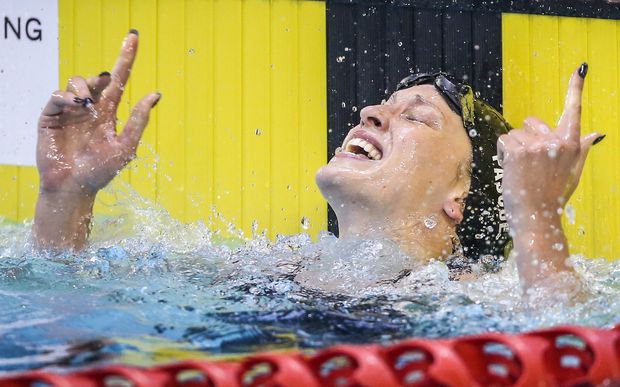 Pascoe slashed more than a second off her own world record in the 100m butterfly for S10 category Para-Swimmers which caps her outstanding week where she has bettered the nomination standard in four swims so far.

Veteran Glenn Snyders is set to become just the fourth New Zealand swimmer to attend three Olympics after going under the standard in the 100m breaststroke and complete a clean sweep of all breaststroke titles this week.

Matthew Stanley added a second qualifying time when he won the 400m freestyle in a classy 3:49.01, after meeting the standard in the 200m freestyle earlier in the meet.

It means New Zealand has six swimmers in eight swims who have gone under the Olympic qualifying standard.

Both Snyders and Stanley continued the positive trait this week of going faster in the evening swim.

Stanley played the waiting game to power home over the final 100m to win the 400m freestyle in 3:49.01, going under the qualifying mark for Rio, to add to his 200m freestyle effort earlier in the week.

"That's the best way that I swim the 400s is even paced. Once I can improve the efficiency over the first 200 then the time will come down further," Stanley said.

Snyders made it a clean sweep of all breaststroke titles as he went within a blink of the magical minute mark in winning his specialist 100m breaststroke in 1:00:08s in an outstanding swim.

The 28 year old, based in Los Angeles, produced a superb effort, after going under the qualifying standard in his morning heat in 1:00.36.

"I am absolutely rapt with that swim. I just wanted to go faster tonight," Snyders said. "I haven't had the best build-up with injury coming into the trials and having not raced much. I didn't know what to expect.

"I was pleased with the 50m and the 200m was really encouraging and tonight was great.

"I guess this shows that my determination and perseverance over 15 plus years in the sport has paid off and to join the likes of Helen Norfolk, Dean Kent and now Lauren in three Olympics is special."

Pascoe, who has also had a mixed build-up, has been in storming form throughout the meet before taking on her favourite 100m butterfly tonight.

The Canterbury Para-Swimmer went through the 50m mark in a tick under 29 seconds before powering home to clock 1:02.60, which smashed her own world record by more than a second.

Her top form, so far out from Rio, made a statement to her international competitors who are approaching their qualifying trials around the world in the coming weeks.

"I was surprised to get down into the 1:02s, I was hoping for a 1:03 low. When I saw 1:02.60 I was pleasantly surprised but I wanted a strong nationals to show all the others beginning their nationals that I am on form for Rio coming up in five months time.

"Now it is head-down and bum-up and try to get under that again in Rio. It is now all about hard work and dedication. I only have one thing on my mind and that is achieving my goals in Rio."