Welsh rugby referee Nigel Owens will take charge of his 71st Test when he runs out for the match between Fiji and Tonga in Suva in June. 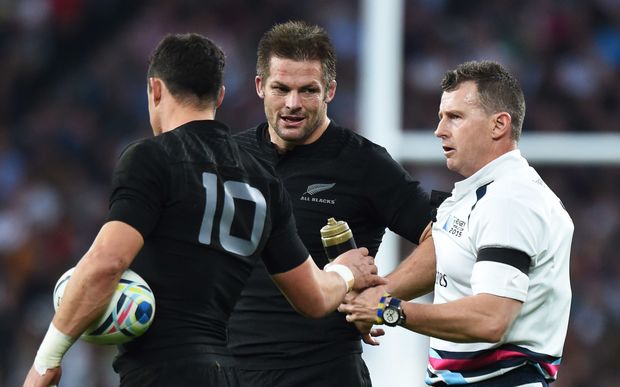 In the process Owens will become the most experienced international referee of all time, taking over from Jonathan Kaplan of South Africa, who refereed 70 Tests during his career.

Owens made his Test debut in 2003 when Portugal beat Georgia 34-30 in Lisbon.

In that time he has taken charge of 16 Six Nations matches and 12 in The Rugby Championship (formerly the Tri-Nations) as well as three European Cup finals and, the biggest one of them all, the Rugby World Cup final between New Zealand and Australia at Twickenham last October.

Owens said it was an honour to be appointed to this important match, and he will prepare in the same way as he always does.

"Indeed, every time I take the field as a referee it is an honour and even more so when it's a Test match," Owens said.

"I don't think anyone goes into refereeing in order to break records like this but I suppose what it says is that I've managed to stay at the top level of the game for a while now so there is a lot of satisfaction and pride that comes with that."

He said refereeing the Rugby World Cup final was a wonderful experience and one he will treasure forever but every match is memorable in its own way.

"And I am really looking forward to this next challenge in Fiji, where I have never refereed before. I have been fortunate to have so many people supporting me along the way - friends, family and other past and present referees as well as the WRU and World Rugby. It has been a hugely rewarding and enjoyable journey so far and I hope to keep going for some time to come."

Owens is one of 27 referees who have been appointed to matches during the upcoming internationals, which get underway on May 29th when England play Wales at Twickenham. Italy's Marius Mitrea has been appointed to that one and he is one of four officials to have been awarded two Tests in the latest round of selection, the others being Owens, Wayne Barnes of England, and New Zealand's Ben O'Keeffe.