All Blacks Sevens player Scott Curry has re-signed with New Zealand Rugby making him available to play sevens through to the end of 2018.

27 year old Curry has been a regular member of the All Blacks Sevens since making his debut in Dubai in 2010 and will now be available for two further seasons of the World Series and the 2018 Commonwealth Games in Brisbane. 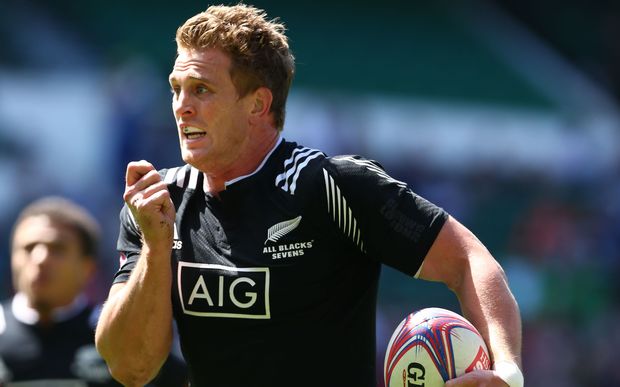 "It's a really exciting time for sevens as a game so I really want to keep being part of it," said Curry. "It's always a huge honour being involved with the All Blacks Sevens and I'm grateful for the chances I've been given."

Curry's impressive power and strength on attack and defence has made him a favourite of coach Gordon Tietjens in recent seasons. He enjoyed a stellar 2013/2014 season which saw him named in the World Rugby Sevens Dream Team. He followed that up with stand-out form in 2015 and was named the Richard Crawshaw Memorial All Blacks Sevens Player of the Year at the New Zealand Rugby Awards.

Looking back Curry said 2013/14 was one season he recalls fondly.

"It was a huge season for the team. We won the World Series after winning the last two tournaments in Edinburgh and London. And following that up by being part of the New Zealand sevens team at the Commonwealth Games in Edinburgh was really special too."

In 2015 the trained science teacher was elevated to the captaincy at the start of the current season following the decision of DJ Forbes to concentrate on his game. Unfortunately a shoulder injury in the season opener in Dubai ruled him out for the remainder of the 2015/16 series.

Curry is on track to return to the team in time to be considered for selection for the New Zealand Olympic sevens team.

"It's the dream of any athlete to compete at the highest level of sport so I'm working really hard to be in the best possible shape to be selected for Rio. There's huge competition and I take nothing for granted. We want to win gold and we'll need the best possible team to realise that goal. I hope I can play my part in making sevens history."

New Zealand Rugby Chief Executive Steve Tew said Curry's decision was great news as retaining highly skilled and experienced campaigners like him was vital for the ongoing success of sevens.

"Scott's an inspiring character with true grit that makes him the epitome of the sevens athlete who must perform weekend in, weekend out in one of the most demanding games there is. He's had a few setbacks over the years, but through it all he's bounced back and that speaks volumes about the character of the man. I've no doubt he will remain a key member of this side over the next few years as it focuses on Olympic success and other goals."