Virat Kohli has almost singlehandedly guided hosts India into the semi-finals of the World Twenty20 cricket tournament, at Australia's expense.

The Indians won by six wickets with five balls remaining at Mohali, finishing on 161 for four as they chased down Australia's 160 for six. 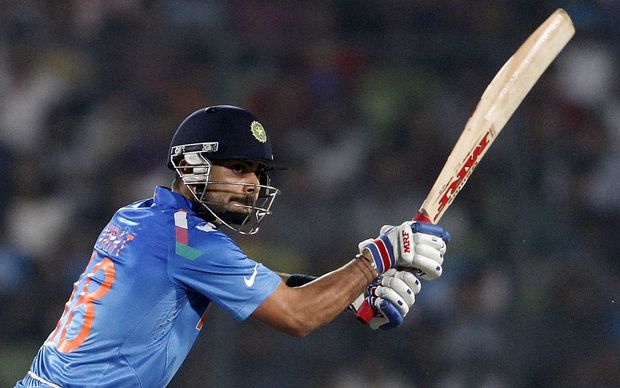 Virat Kohli put in a man of the match performance as India went past Australia into the semis Photo: Photosport

Man of the match Kohli's huge knock of 82 off 51 balls - including four fours off the penultimate over - took the required run rate down from more than 10 an over to just four from the final over.

Captain MS Dhoni struck the winning runs off the first ball of the 20th over.

The final World Twenty20 Super 10 match served as a knockout match to secure a place in the last four versus the West Indies, and the Australians looked to be in the box seat.

Their captain Steve Smith won the toss and opted to bat, and a decent total of 160 for six at the IS Bindra Stadium seemed more than enough with the Indians 94 for four after 14 overs when Dhoni joined Kohli at the crease.

Hosts India, inaugural World T20 champions in 2007, and reigning 50-over champions Australia had won two matches each in Group Two with their only loss against New Zealand, who already reached the semi-finals where they face England on Thursday morning in Delhi.

Australia, who failed to win the World Twenty20 title in its previous five editions, were unchanged from the team that beat Pakistan in their last match.

Afghanistan have handed the West Indies their first loss of the tournament as the Afghans bowed out in style.

The West Indies lost by six runs in their final Super 10 pool game at Nagpur but still top the group from England with a superior net run rate.

Afghanistan, who lost the toss and were sent in to bat, rode an unbeaten 48 off 40 balls by Najibullah Zadran to post 123 for seven and held their nerve to register their first win in Group One and ruin their opponents' 100 percent record.

The West Indies had already qualified for the semis before the game.

"Obviously we are disappointed, but there's no doubt we are not going to let this dampen our spirits," Windies' Darren Sammy told reporters.

Leg-spinner Samuel Badree decimated Afghanistan's top order, taking three wickets for 14 runs to leave them struggling on 52 for four in the 10th over, but man-of-the-match Zadran got four fours and a six at No.6 to guide them to a competitive total.

Leg-spinner Khan caught Evin Lewis - in for the rested Chris Gayle - off a Hamza delivery for a duck in the third over to leave the Windies at 17-1, while off-spinner Nabi got top-scorer Dwayne Bravo lbw on 28.

Andre Fletcher retired hurt with a hamstring problem, but was forced to return at the death as Afghanistan's spinners kept picking off the Windies' batsmen.

Khan bowled Marlon Samuels on five and got Denesh Ramdin stumped on 18 to keep the pressure on and combined with wicketkeeper Mohammad Shahzad to run-out Andre Russell at the non-striker's end on seven after a mix-up with Sammy.

Nabi then struck again to see off the big-hitting Carlos Brathwaite, who smashed two sixes in the penultimate over to leave his team needing 10 runs off the last six balls.

Zadran played a major part in Brathwaite's demise, taking a brilliant running catch to send the danger man back to the pavilion for 13 as the Windies ran out of steam.