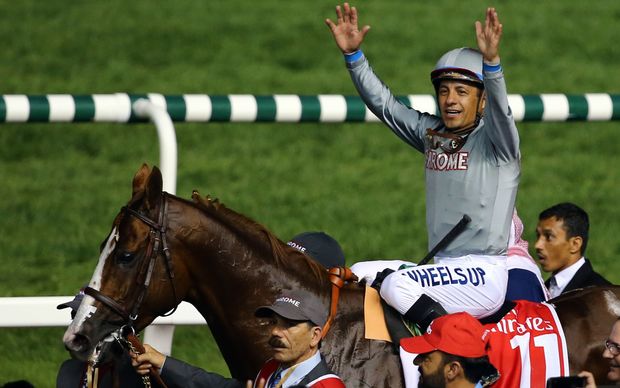 Trained by Art Sherman, the 15-8 joint favourite won the 2,000-metre race by 3.75 lengths, despite Espinoza having to battle with a slipping saddle during the ride.

"He likes to run clear of his horses, he doesn't like to be bumped around. Victor knows him, he did a super job," trainer Sherman told reporters after the race at the 60,000-capacity Meydan racecourse.

Hoppertunity came third of the 12 runners in the contest.

"We've come across a superstar on the dirt, as California Chrome is - fantastic, and I am honoured to run second to him," Mubtaahij's trainer Mike de Kock said in televised comments.

A switch to a dirt track last year has helped to attract U.S. horses to the event. Eight of the 12-horse field were American this year.

Chrome, who was the favourite last year but came a surprise second, has been in Dubai for more than two months, whereas last year he arrived just 10 days before the race.

The five-year-old is owned by California Chrome LLC and is also the 2014 Kentucky Derby and Preakness champion.