Tributes are pouring in from the football world for the legendary Dutch player and coach Johan Cruyff, who has died aged 68, after a five-month battle with lung cancer. 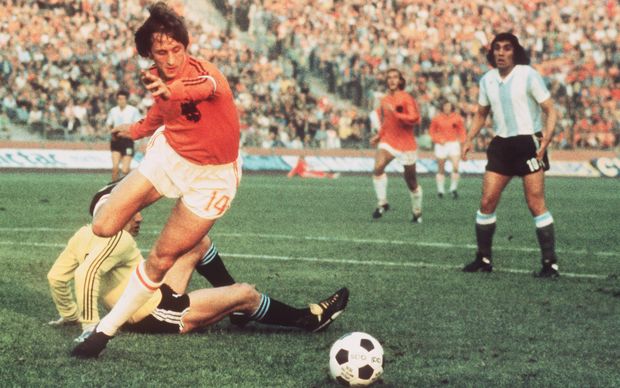 Johan Cryuff on his way to scoring the 4-0 goal against Argentina at the 1974 FIFA World Cup in Germany Photo: AFP

Former England captain Gary Lineker, who played under Cruyff at Barcelona, summed up the Dutchman's contribution by saying on Twitter: "Football has lost a man who did more to make the beautiful game beautiful than anyone in history."

Sad to hear that Johan Cruyff has died. Football has lost a man who did more to make the beautiful game beautiful than anyone in history.

Former Barcelona coach Pep Guardiola - another mentored by Cruyff at Barca - said: "RIP @JohanCruyff, a genius, a legend and the man who changed the mentality of the @FCBarcelona."

RIP @JohanCruyff, a genius, a legend and the man who changed the mentality of the @FCBarcelona pic.twitter.com/7E05F3x2EB

The friendly between Netherlands and France will be halted for a minute's silence in the 14th minute in a tribute to Johan Cruyff.

Cruyff wore No.14 in his playing days.

The decision to interrupt the game was announced by the Dutch football association.

Both the Netherlands and France teams will wear black armbands during Friday's match in Amsterdam and will also observe a minute's silence before kickoff, in memory of the 34 victims of the Brussels bomb attacks in Belgium midweek.

According to a message posted on Cruyff's website, he died in Barcelona, surrounded by family.

As a player, Cruyff was the embodiment of Dutch "total football", a fluid style of play focused on ball possession and rapid passing, and involving all members of the team in both attack and defence.

Born Hendrik Johannes Cruyff, he joined Barcelona for a then world record transfer fee of $US2 million, and it was Barcelona that would later define his coaching career, helping the Catalan club to win their first La Liga title in nearly 15 years in 1974.

He was also a key player in the great Netherlands team that reached the 1974 World Cup final when, for the first time, during the tournament a global audience saw him perform the now-famous "Cruyff turn" the movement in which the player with the ball plays it behind their own leg before swerving away in the direction of the ball.

The Dutch also got to the World Cup final but lost again in 1978, this time without Cruyff who had quit the national side, saying years later he walked away after an armed kidnap attempt.

Following stints at Los Angeles Aztecs and Washington Diplomats in the old NASL, then Levante in Spain, Cruyff returned to Ajax before ending his playing career at their bitter rivals Feyenoord in 1984.

In 1999, he was voted European Player of the Century while he is often bracketed alongside Brazil's Pele and Argentina's Diego Maradona as the three best players ever to grace the sport.

The possession-based playing style Cruyff promoted, with an emphasis on relentless attack, has been widely copied and is credited with underpinning Barca's subsequent successes, as well as those of the Spanish national team.

Cruyff had announced last October that he was suffering from lung cancer but continued to write his newspaper column and earlier this month travelled to Israel to visit his son Jordi, who is technical director at Maccabi Tel Aviv.

Only last month he said he was "2-0 up in the first half" of his battle against lung cancer. Poignantly that turned out to be one of the last public statements made by the man whose footballing pronouncements were eagerly sought after by soccer fans around the globe.

His death prompted Dutch radio and television stations to suspend regular programming, with Ronald de Boer, another Dutch international who played at Barcelona, declaring: "He was the best footballer we ever had."

Cruyff had been a heavy smoker, and had had heart surgery in 1991. His death comes less than six months after he announced that he had been diagnosed with lung cancer.