The Highlanders have welcomed back a number of players from injury for their Super Rugby clash with the Melbourne Rebels in Melbourne on Saturday night. 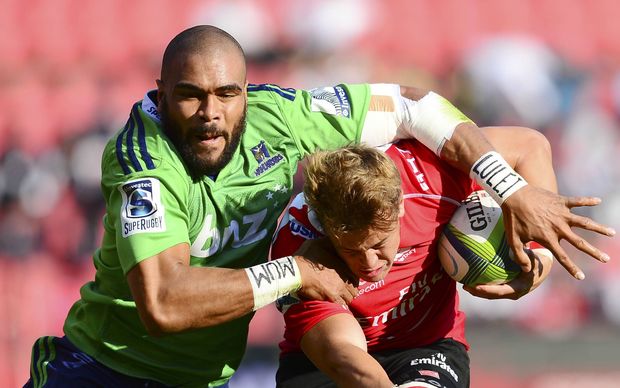 Andries Coetzee of the Lions tackled by Patrick Osborne of the Highlanders. Photo: PHOTOSPORT

In the forwards, regular starting lock Joe Wheeler re-joins the team and will partner with Mark Reddish who, after a good showing last week against the Waratahs, has been promoted to the starting fifteen.

The locks who started against the Waratahs last weekend, Alex Ainley and Tom Franklin, have both been left out of the matchday 23 this week.

Loose forward Luke Whitelock takes his place on the side of the scrum after recovering from a knee niggle during his week off with Elliott Dixon dropping to the bench.

In the backs, Patrick Osborne will take his place on the left wing after overcoming a hip injury sustained during the Highlanders win over the Lions in round three.

New recruit Jack Wilson (injury replacement for Richard Buckman), will play his debut game for the Highlanders on the right wing.

Wilson, who only joined the team from the United Kingdom last week, has previously played for the Sharks in the 2015 Super Rugby competition and earned himself five caps during the season, he also played for Otago in the 2015 ITM Cup.

Hooker Ash Dixon rotates into the starting team and Liam Coltman swaps onto the bench with Otago teammate and prop, Craig Millar, joining the reserves for the first time this season.

The Highlanders are second in the New Zealand Conference with 3 wins and a loss.