New Zealand became the first team to book a spot in the World Twenty20 semi-finals after opener Martin Guptill smashed a 48-ball 80 to set up a 22-run win against Pakistan in Mohali. 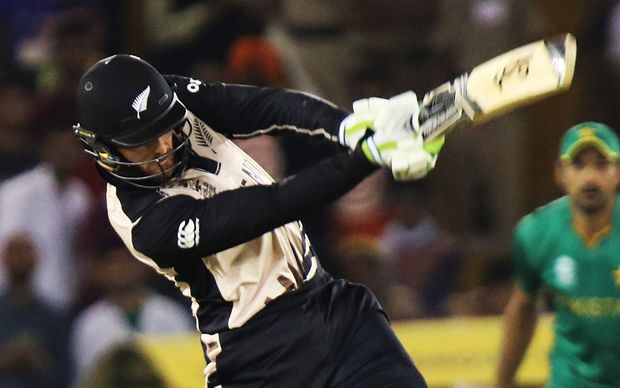 Guptill hit 10 fours and three sixes in his innings, sharing an opening stand of 62 with captain Kane Williamson, after an unchanged New Zealand won the toss on a green-tinged surface to post 180-5.

Sharjeel Khan (47) gave his team a brisk start in their chase with New Zealand either bowling too short or too full on his pads as Pakistan raced to 61-0 in five overs.

However, the rest of Pakistan's batsmen found it hard to hit the boundaries after paceman Adam Milne dismissed the left-handed opener, who struck nine fours and a six in his 25-ball knock.

However, the rest of Pakistan's batsmen found it extremely difficult to find the boundaries after paceman Adam Milne dismissed the left-handed opener, who hit nine fours and a six in his 25-ball knock.

Pakistan captain Shahid Afridi, who will retire from international cricket after the tournament, promoted himself to number five in a bid to provide momentum but his vigil at the crease lasted nine balls in which he scored 19.

The Black Caps left-arm spinner Mitchell Santner, who was taken for 15 runs in the first over of the innings, came back superbly to finish with figures of 2-29 in his four overs and, along with leg-spinner Ish Sodhi, applied the brakes on Pakistan's scoring.

Milne also kept the batsmen on a tight leash with figures of 2-26 as Pakistan could only manage 158-5 in their 20 overs.

It was New Zealand's third straight win in Group Two after victories over hosts India and trans-tasman rivals Australia.

Earlier, Guptill also combined with Corey Anderson (21) for a third-wicket stand of 52 that set the platform for Ross Taylor (36 not out) to finish with a flourish.

Mohammad Amir gave away 16 runs in the final over with Taylor hitting him for six and four to ensure that Pakistan would have to score over nine runs an over in their chase.

The New Zealand captain Kane Williamson said, "The batting unit played their roles really nicely and after a tough start the bowlers pulled it back nicely."

Mohammad Sami and captain Shahid Afridi picked up two wickets apiece for Pakistan, who made two changes to the team that lost to arch-rivals India in their last match.

Pakistan, who are in second place with one win from three matches, need to beat the Australians in their final game and hope other results go their way to reach the last four.

Third-placed Australia and India in fourth each have one win from two matches, while bottom side Bangladesh, who came through the qualifiers to join the Super 10 stage, have little chance of progressing after losing their first two games.