The Black Caps have booked themselves a semi-final berth at the World Twenty20 cricket tournament in India following their dramatic 22-run win over Pakistan in Mohali. 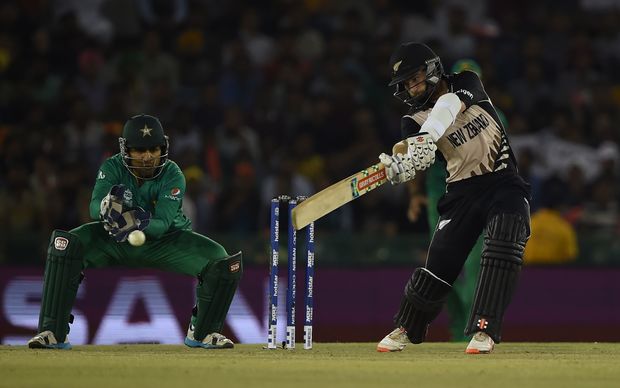 Missed the match? Check out how it unfolded here

The New Zealand cricketers beat Pakistan by 22 runs after staging a fightback with the ball in the second innings.

Martin Guptill spearheaded the New Zealand innings with 80 runs off 48 balls on a pitch he had never played on previously.

Ross Taylor and Corey Anderson also played crucial roles in their innings, Taylor made a quickfire 36 off 23 balls while Anderson made 21 off 14.

Chasing 181 to win, Pakistan got off to a fast start, rocketing to 50 runs within the first five overs.

Opener Sharjeel Khan proved to be the wicket New Zealand needed to get after he blasted his way to 47 off 25 balls.

He was the first of Pakistan's wickets to fall and when he was dismissed in the sixth over the momentum slowly began to shift the way of the New Zealanders.

Ahmed Shehzad and Umar Akmal both contributed with the bat for Pakistan, splitting the New Zealand fielders to reach 30 and 24 respectively.

The key wicket of Shahid Afridi came in the 15th over when he was dismissed for 19 off of just nine balls.

In the end Pakistan, like India and Australia before them, couldn't find their way past New Zealand's bowling attack at the death.

The win for New Zealand means they're now guaranteed a spot in the semi finals after going unbeaten in their pool with just one match left against Bangladesh on Monday.