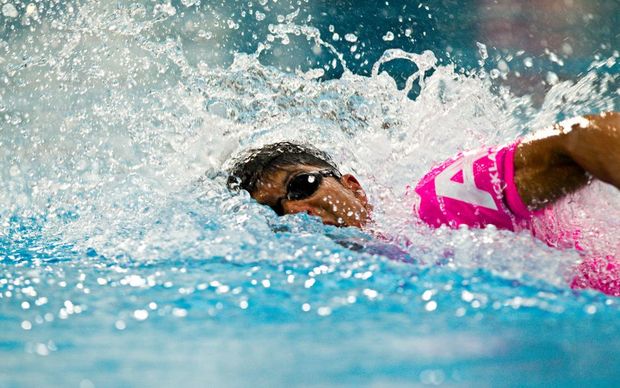 The win puts him in second place overall behind Zane Schweitzer of Hawaii and means Sunday's final Stand Up Paddle Endurance race could be won by either competitor.

The Underwater Strength Run and Swim is new for 2016 and involves competitors dropping into the pool and holding their breath for 30 seconds before running along the bottom holding a 25kg dumb bell in each hand.

Competitors were required to then drop the weights on a mat, come to the surface and sprint swim 25m back to the start. Each athlete had two attempts and their best time was taken.

Ching said he realised yesterday at a group training session that the sprint swim element was going to be the deciding factor.

"I noticed that we were all on par with each other in regards to running with weights, it was slippery on the bottom and it was going to be hard to get an edge.

"I felt confident after that because I was a high school swimmer for ten years specialising in sprint swims so I knew I could win," said Ching after the race.

Sunday's final race is a 16km race back to shore from Motuihe Island.