The Blues came from 25-15 down in the last six minutes to secure a 25-all draw in Brisbane last night, leaving the Queensland Reds still without a win after four Super Rugby matches. 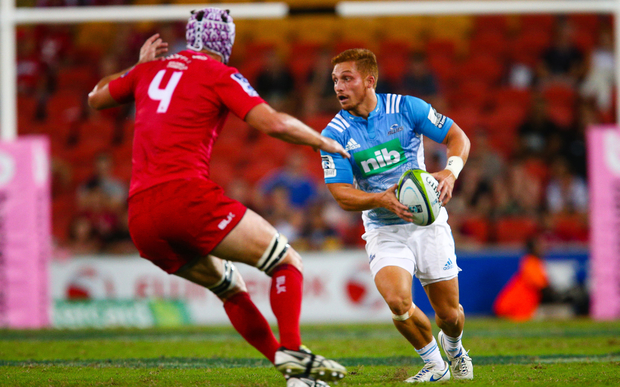 Blues five-eighth Ihaia West during the team's match against the Queensland Reds in Brisbane. Photo: PHOTOSPORT

Five-eighth Ihaia West slotted the equalising penalty after the hooter; he also opened the scoring, with a first-half try after a break from debutant teenage winger Rieko Ioane.

A superb score from Bryn Hall then helped the Blues to a 15-13 lead at half-time.

The Reds took a 10-point lead when centre Samu Kerevi and five-eighth Jake McIntyre crossed in five minutes around the hour mark, but replacement Blues half-back Billy Guyton darted across the line in the 74th minute to set up a dramatic finale.

Blues lock Josh Bekhuis, who clocked up his 100th Super Rugby Game, said they came out of the blocks strong.

"I think we had a better start than what we had in the previous games. The line out was going pretty good but there's also some work ons such as just keeping, if we get a wee lead, just keeping arms length and keeping a bit of scoreboard pressure on them."

The Stormers have just beaten the Brumbies 31-11 at home in Cape Town.

Earlier this morning, the Lions beat the Cheetahs 39-22 in their South African derby at Ellis Park.